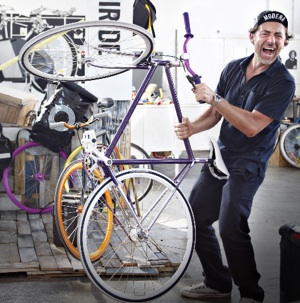 Push me and then just touch me
Till I can get my satisfaction, satisfaction
Benny Benassi

I recently came across this really nice interview with Benny Benassi, in which he discusses Madonna, the bike tour of California, and house music. Quite a great read.

You’re currently on your Rough Road bus tour, tell us a little bit about that and where the idea came from?

After the bike tour of California I did a couple of years ago, I really wanted to do another road trip, but I kept putting it off so I finally decided to just go for it. This time on a tour bus. It’s a little more extensive than the bike tour, going from Texas through to California and then up the coast to Vancouver.

And you’re not doing it by yourself, you’ve roped in Pink is Punk to help you along the way, should we be keeping an eye on these guys?

Definitely! I teamed up with them for their new track Perfect Storm, which was released last month on Ultra Records. They come from my homeland of Italy and they’re not only great guys but fantastic producers.

It’s almost been ten years since Satisfaction was released and that famous video. Do you still enjoy playing it and did you ever expect it to be that successful?

Satisfaction has played a big part in mine and Alle’s [my cousin] careers. But we never could have imagined the impact it had. The riff was written by Alle, so he deserves a lot of the credit! The video idea came from Ministry of Sound, the UK label who put the track out. It’s fun though, right? Check out the “bus wash” clip from the Rough Road tour. The idea is still alive and kicking.

You recently worked with Chris Brown on the song Beautiful People. How did that come about?

A series of coincidences… There’s a friend of Alle and mine in LA, Jean Baptiste, who writes for Black Eyed Peas, Rihanna and other U.S artists. He had the instrumental of Beautiful People on his computer for a long time and one day he woke up and wrote most of the lyrics and melody. Chris Brown popped into his studio, appreciated the track and asked if he could perform it!

Your summer has been filled with festivals but you also were hand picked by Madonna to perform with her in Abu Dhabi, what was that like?

It was a great experience; I respect her talent and was honoured she wanted me there. It was unbelievably hot and humid, you know, I only had to play a 40 minute set so I can’t imagine what it was like for Madonna who performed for two hours in the sweltering heat.

You also headlined Cream and Together in Ibiza, what were those nights like?

Ibiza is like nowhere else in the world and no night is ever the same. Genres of music are always changing and evolving but they also have strong influences on each other, so I’m not even sure what House music is anymore. That’s what makes it so exciting and why I’m really looking forward to what the place has to offer in 2013.

Let’s go back to the start – how did you get into DJing and producing?

I’ve always loved music and thought about being a DJ ever since I was a teenager, it was that or a professional cyclist. I started DJing in a club near where I lived, a small village near Reggio Emilia, northern Italy. I was lucky enough to have a cousin, Alle Benassi, who’s a talented musician and I got him into producing electronic music on a computer. We became a production team, one thing led to another and here we are now. People always ask what it takes to be a DJ and quite simply I think it’s all about playing the music people want to hear, as long as you can do that you can DJ.

It’s all top secret right now but I can say there will be a new album, some possible remixes and definitely more tours so watch this space.