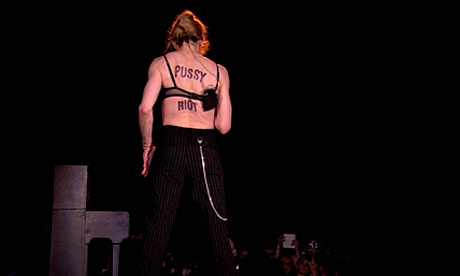 Madonna during performance in Moscow. Source

I don’t know who heard about these three feminist punk rockers (Nadezhda Tolokonnikova, Maria Alekhina,  and Yekaterina Samutsevich ), or Pussy Riot, until February this year, when they performed a protest song named “Virgin Mary, redeem us of Putin” in Christ the Saviour Cathedral in Moscow, with their faces covered with some balaclavas. The song is about claiming Virgin Mary to become a feminist and banish Vladimir Putin, and criticizes the support shown to Putin by some representatives of the Russian Orthodox Church.

The girls were charged with “hooliganism motivated by religious hatred”, and prosecutors have called for three years prison after they have  already been in custody for about five months, which actually means: don’t mess with Putin or the Orthodox Church, or don’t try to express yourself in a country that forbids this action. 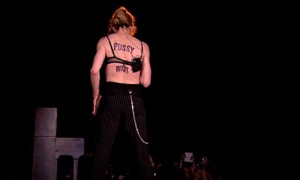 Madonna during performance in Moscow. Source

During a performance at the Olimpiyskiy on Tuesday night, August 7, Madonna demanded Russian government, through a speech,  to free the girls from punk rock band Pussy Riot, she also undressed and showed off her back on which she wrote the bands name with capitals.

I know there are many side to every story, and I mean no disrespect to the church or the government, but I think that these three girls – Masha, Katya, Nadya – I think that they have done something corageous…I pray for their freedom.

Madonna is not the only musician that supports these girls, there is Bjork, Red Hot Chili Peppers, Faith no More, Sting and many many others. Sting actually performed recently in Moscow, during a tour, and shared his opinion about this case.

Dissent is a legitimate and essential right in any democracy and modern politicians must accept this fact with tolerance.

It’s impressive how many celebrities are moved by these girls case, and I hope to and end of  this “carnival” with positive results, soon.