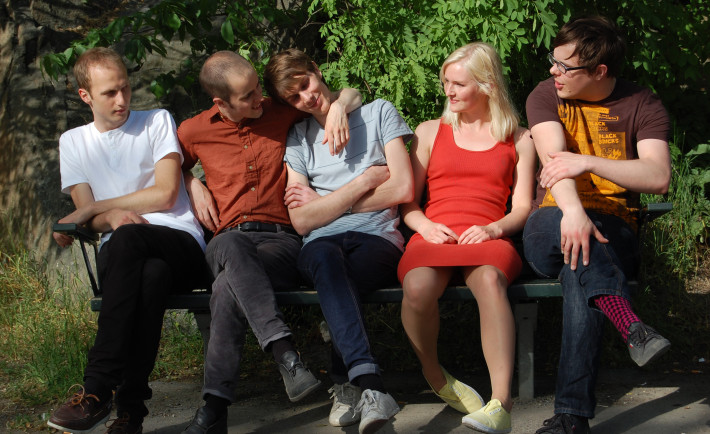 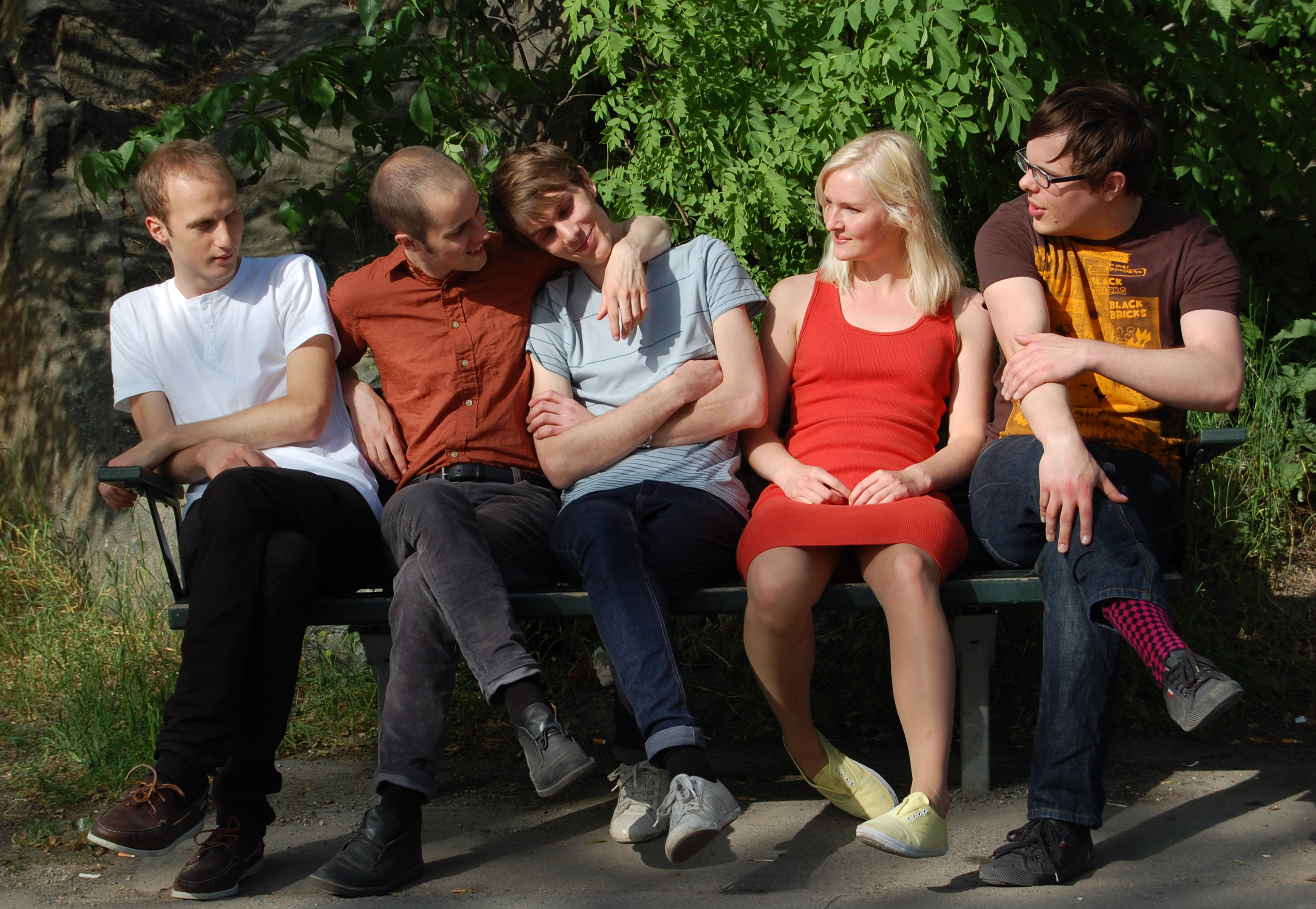 They form a Swedish indie pop band, that has been making music for two years now (well, that we know of). Coming across a couple of their songs has been my musical highlight last month. Their sound is unique: breezy vocals and playful keyboards, which are both combined with the most eclectic guitar sounds.

Those who are already familiar with their music are going to be extremely happy to know that the members of the band have agreed to do an interview for us. Pontus, Andrea, Kristoffer, Gunnar and Robert explain their musical influences and preferences, the special sounds of their songs and they also tell us the stories of three of their most acclaimed tracks. They talk about the gigs they have already done, but also about future projects and aspirations.

So let’s cut to the chase and get to know the guys:

ZME: You are called „Hari and Aino” but the band consists of 5 members. It’s a fun contradiction, but why exactly is it like this? Who decided to have it so? Why that name? What is the concept behind it?

H&A:Naah.. there is no special cause at all- we basically needed a name to put up songs on myspace- and we thought it would be interesting to take a Japanese name and a Finnish one and combine these two together..Hari and Aino!

ZME: The pleasantly, windy vocals and the playful keyboards are the first two things I noticed when listening to your songs for the first time. As special as it may be (considering that this was one of the reasons I started to like your music so much), it is also noticeable in other indie pop bands. Besides this, please mention what other things make Hari and Aino special and unique on the indie pop scene. Any other special sounds to it?

ZME: For a couple of years now, Sweden has presented a lot of indie pop bands and the number is constantly rising. This is obviously a good thing, as the Brits finally got a worthy opponent. Where do you see this going, for example, in 10 years from now? Who will end up as the winner? And please leave your modesty aside, as much as possible.

H&A: ABBA will always be the winner. To bad that they seem like very unfriendly people. They made great music once. Where are we in 10 years? We hardly know what we are going to do tomorrow. If we had a plan for 10 years ahead it would be to do everything we could not to have to do anything at all. Kind of like everybody who had a hit single in the eighties. Whoever tries as little as possible to be a popstar, that´s who´s going to be the winner.

ZME: I was looking over your MySpace page and noticed, that you still haven’t booked any concerts. When do you expect to start touring at least throughout Europe? And when can we expect to attend a show in Romania?

H&A: We have actually played lots of shows. Besides doing a lot of clubs and venues in Stockholm and other cities in Sweden, and playing the legendary Swedish popfestival Emmabodafestivalen we have toured in the UK and been to Finland and Germany to play shows. Right now we are focusing on recording some new material so if there are any shows right now it´s because someone asks us to go somewhere, and it seems like a fun place to go. Romania would be great. Anyone who wants us to go to Romania is welcome to invite us for a show.

ZME: Imagine that you were invited to the biggest popfest ever(for example the NYC PopFest or the one in San Francisco) and you had to choose a day to perform, where you also had to choose the remaining bands of the day. What names would you like to see, next to yours, on the advertisement of the biggest popfest imagineable on the planet? Who would you choose and why?

H&A: David Bowie. Without a question. If just David Bowie comes then everyone else can stay home.

ZME: What are the basic influences of the band? What familiar sounds are your listeners supposed to observe? Give a couple of examples (genres, solo artists, bands etc.)

H&A: It´s hard to say of course since it’s five of us and everyone have their own preferences and musical taste. We’ve never really been about name dropping of other bands to create music ourselves. We do the trial and error thing with our own music and everyone brings their personal taste and preferences in to that. But we do like a lot of stuff which you might not think fits into the picture like Paul Simon, Fleetwood Mac, Squeeze, Tom Petty and Toto. But like everybody else we like the Smiths of course.

ZME: Of special interest to me are „Seasons”, „Your heartache and mine” and „On my usual catch up with Cecilia”. I fiind these to be the three most beautiful songs so far released from you guys. Could you shortly tell the story for each of them?

H&A: “Seasons” was a song that we struggled a lot with to get the sound that we wanted. The guitarplay might sound very easy and flowing but it´s really hard to play. And the sound of the bass is just about as good as we have ever managed to get it. The bells is what makes the song for me, that and Andreas way of singing it.

“Your heartache and mine” was the first song we ever wrote, and the first one we recorded. Robert, who plays the guitar on that one had the idea for it for very long time, and then we played and played and played until we got all the parts together to make it a whole song. We usually play it much faster and without the intro when we do it live.

“On my usual catch up with cecilia” is actually two songs that became one. The verse was originally just the bassline, which Kristoffer, who plays bass on that song, had been playing around with for a while. Then when we tried adding guitars to that bassline we noticed that it fit together with the chorus that was from another song we worked on at the moment. The break was obivouly inspired by the soundtrack to the movie Shaft, but with a caribbean vibe and bongos put over it. The lyrics speak for themselves.

ZME: What other type of music do you like listening to:
– when you wake up on a Sunday morning, or simply, when you’re at home and you’re not practicing your own tracks?

H&A: We play loads of old music like Bob Dylan, Fleetwood Mac, Tom Petty and Paul Simon. At home when we are just relaxing we also find that Miles Davis works really great.

– when you go to a party? (and you’re the ones who have to do the playlist for example)

H&A: A party these days would not be complete without a band like MGMT and some old track by Grandmaster Flash.

ZME: When can we expect the new album? Is it going to be different from the first one and from the already released singles, or will you follow your already established sound?

H&A: It´s hard to say. We don´t want to promise anything. It has to feel right. And then again, we might decide not to do an album, and just release track by track. Sometimes it´s fun not doing what everyone expects you to do. The sound, it might be a little different, but you will know it´s Hari and Aino.

We will surely do. Thanks guys for taking the time to do this and I’m sure that I do not stand alone when saying that I’m looking most forward to see what you’ll do next. First, for those of you who are still a little unfamiliar with the band and want to check it out, here’s the tracklist of their first realeased album: 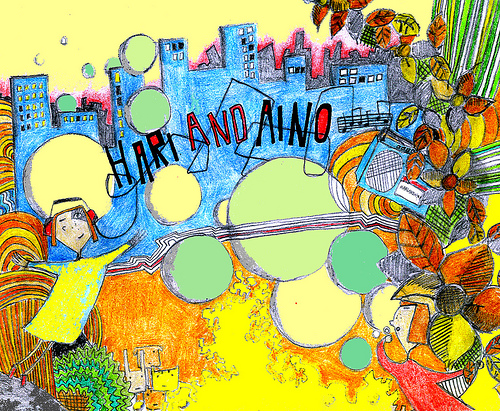 1. Gold (or something just as nice)

10. Thank you for my sisters

And finally, their latest released single – On My Usual Catch Up With Cecilia, downloadable here. Watch this band closely! After listening to their songs you can easily notice their talent and commitment so I’m sure we’ll be hearing lots and lots from them in the years to come! Very good job, Hari & Aino! And thanks once again for taking the time to do this interview!