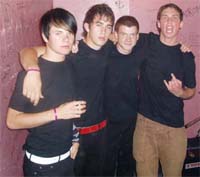 September will be a busy month for post-punk rockers [tag]Enter Shikari[/tag] who intend to win American punk hearts by touring across the United States. Their autumn trek will carry ES through Houston, Cleveland, Chicago, Philadelphia, before wrapping it up in Baltimore. UK fans haven’t been forgotten either, so after ES’s September US tour, they’ll be catching the first flight to the island and begin their October/November UK headlining tour.