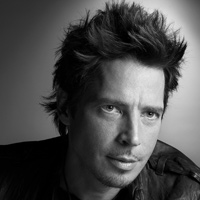 Although he’s been the frontman for one of the grunge pioneers with Soundgarden,before the early ’90 hard rock bum and also the lead singer for one of the most iconic rock groups of the new millenium Audioslave, [tag]Chris Cornell[/tag] feels better riding alone.

According to him “I am in a situation where I can kind of spontaneously make decisions and do whatever I feel like doing,” he says. “Any future ideas in terms of recordings or collaborations I want — it’s all kind of materializing. I’m finally realizing anything is possible.” And I though my teens was a rough time, having a rough time with those forties Chris?

Apparently Chris is in top shape from all points of view and since he’s been soling he’s been terribly energetic and motivated. Lately he announced that he’s reached a creative climax and is hard at work, writing new songs. “It’s very exciting for me [to be able to put out music quicker],” he says. “I already have plans to do different projects and release different things over the next six months and over the next year.”

When talking about new direction the music industry is heading to Chris said: “Other people are starting to do what I wasn’t able to do — either because I had issues with record company politics or issues with inner-band politics — when it comes to things like giving music away,” he says. “But, most importantly, if I have the thought or the concept to do one or a collection of songs that might not be part of an album or something that becomes a year-long campaign, I can do that. The music business is open to that now. Nobody really has a better idea. I fit perfectly into the world that’s happening now.”

Although he assures his fans that new music will charm their ears soon enough, Chris seems to like to take his time, embracing his latest solo record “Carry On” as his real solo debut, considering his initial solo studio effort “Euphoria Morning” not worthy of title, as it lacked passion.