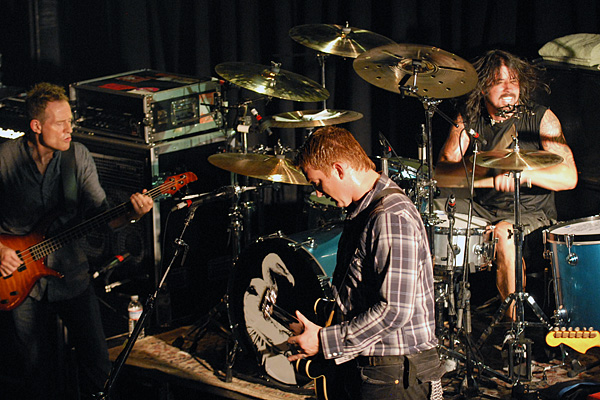 As previously reported, the raddest supergroup to have graced the rock scene in years, namely Them Crooked Vultures, hit Chicago’s Metro this Sunday, rocking the sweaty 1,000+ privileged crowd in hall. How was the band’s debut? Considering it came as an aftershow for the three day Lollapalooza fest that went on this weekend, by all accounts that surfaced (see twitter) it was a simply marvelous experience – hands down the best show from the Lollapalooza area.

If you were curious on the band’s individual duties, learn that, as kinda expected, Josh Homme played lead vocals and guitar, Dave Grohl rammed the hell out of the drum kit and John Paul Jones played bass, along with some keys and slide guitar. Furthermore a four Vulture took the stage last night, long time QOTSA affiliate Alain Johannas, who held rhythm guitar duties, along with occasional backing vocal duties alongside Grohl (very comfortable vocals from the kit. Impressive!).

From all the reviews I’ve read so far, in a nut shell, the band simply rocked the hell out of the Metro. A sweet 80 minute long (no encores) spectacle of rock, packed only with newly made songs ranging from epic space jams to old school prog rock. Oh yeah, and did I mention there will be a new album and tour coming soon too?

Sadly, recording wasn’t allowed, so apart from a few really bad videos on youtube, we’re left to wait for the band’s next appearance or a leak, before we can all experience a dash of Them Vulture’s awesome rock.