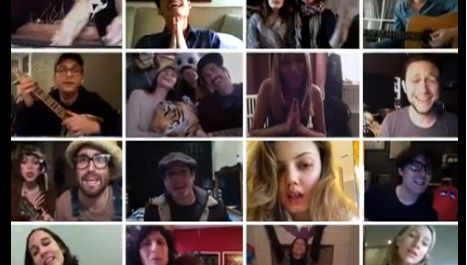 Sean Lennon, the only son of John Lennon and Yoko Ono, has been feverishly protesting against fracking along with his mother, be it through TV ads, billboards, night clubs or on the street talking to people. Now, they’re speaking out against the health risks that fracking might possess by doing what they know best – music.

With this in mind, they’ve enlisted countless celebrities from the world of music and the movie industry to aid them in their Artists Against Fracking campaign. The end result is music video for “Don’t Frack My Mother” a satire that involves a funny word play as Lennon pleads, “Please, don’t frack my mother,” and Ono interjects, “Don’t frack me!”

The video features celebrity friends including Liv Tyler, Susan Sarandon and Joseph Gordon-Levit among others, while text is displayed informing the viewer of the dangers of fracking – an oil drilling technique that involves inserting highly pressurized toxic chemicals in order to force natural gas and oil out, that often leak and thus becoming a health hazard.

Lennon and Ono’s efforts are directed towards New York Gov. Andrew Cuomo, who is currently debating whether to allow or not some 100,000 oil drills to be made through fracking.