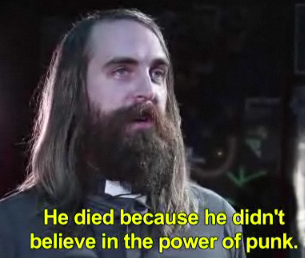 Here’s to starting off the week with a big smile and on dancing steps with Ted Leo and the Pharmacists‘ latest brillinat video for “Bottled in Cork“. The video premiered today on funnyordie.com and in it the band gets convinced by Reginald VanVoorst, played by the hilarious Paul F. Tompkins, to stage their new album “The Brutalist Bricks” as a Broadway musical. Of course, what follows is a slew of intensive rehersals before the musical is performed to a round of applause and unanimous negative critiques. Oh, watch out for John Hodgman and Titus Andronicus’ Patrick Stickles comeos.

The Brutalist Bricks is out now on Matador Records. Be considerate, buy the album kids, and show Mr. Leo there’s still some hope left for the industry.