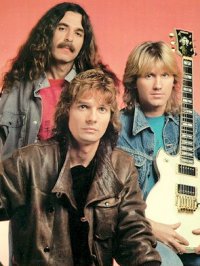 After a year filled with all sort of reunions it seems we are going to have another share of reunited bands. This time we are talking about Triumph.

They made history during the late 1970s and 80s and made a name for themselves as a great live band, with guitarist Rik Emmett being compared with Eddie Van Halen numerous time for his guitar chops. They released over 10 albums in their carreer.

Now, members Rik Emmett, Mike Levine and Gil More will reunite for the first time in two decades at the Sweden Rock Festival outside Solvesborg, Sweden, in June. This is very interesting and they could just be a very pleasant surprise this year.

Anyway an organizer of the festival says they jumped at getting Triumph to play at the festival after the band was inducted into the Canadian Music Industry Hall of Fame and some of the members mentioned they might enjoy doing something together someday. Well most of them say so.