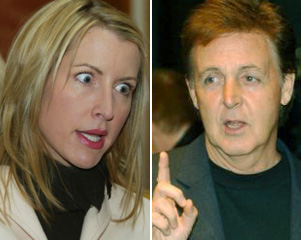 British ex-Beatle [tag]Paul McCartney[/tag] has just tied up the issues concerning his divorce with his former wife Heather Mills. Heather is set to receive, a whooping, 140 million dollar divorce settlement; 30 million now and 7 million each year, until their 3 year old daughter turns 18. Macca’s fortune is evaluated at 1.4 billion dollars.

The couple first announced their breakup in May 2006 and since then loads of posts on various tabloids and newspapers erupted. Some implying Heather was having an affair with her gym trainer or that she only married Paul for his money, at which she reacted “I am no gold digger” and that the allegations were “worse than losing my leg”. I’m sure you love Paul with all your heart Heather and that the fact he could be your dad and has tons of money didn’t in any way affect your relationship.