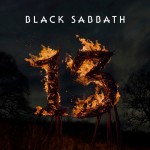 35 years. That’s how long it’s been since the release of Never Say Die!, the last Black Sabbath studio album to feature the band’s original lineup of Ozzy Osbourne, Tony Iommi, Geezer Butler, and Bill Ward. When Black Sabbath reunited in 2012, they announced an album that was to be the long-awaited studio return of this legendary lineup. The resulting record, entitled 13, does not quite fulfill that promise, as drummer Bill Ward pulled out of the recording due to a contract dispute. Despite his absence, 13 is still noteworthy for being the first Ozzy-fronted Sabbath studio album released since 1978. Joined by Rage Against The Machine and Audioslave drummer Brad Wilk, Ozzy and the band are able to recreate the classic Sabbath sound better than anyone could have ever expected. For the most part, Black Sabbath have succeeded in crafting songs that sound like they could have come straight out of their early ‘70s prime.

13 opens with “End of the Beginning.” The eight-minute epic features one of Osbourne’s most powerful and impassioned vocal performances on the album, and the track is a clear highlight. Its long length is not unique, as five of the eight tracks on 13 cross the seven-minute mark. Such is the case with the next song, “God is Dead?” The album’s first single, “God is Dead?” features slow, menacing verses and an explosive chorus. Perhaps a little overlong at nine minutes, “God is Dead?” is still a good, skull-rattling rocker. The song is followed by the upbeat “Loner.” While it’s a rather standard-sounding Sabbath track, “Loner” still excites thanks to great guitar-work by Tony Iommi. Things then slow down with “Zeitgeist,” which essentially sounds like a rewrite of “Planet Caravan.” Yet, despite its similarities to that Paranoid track, “Zeitgeist” contains pretty and haunting melodies that make it stand out all on its own. The next song, entitled “Age of Reason,” opens with a rousing drumbeat before seguing into one of the best riffs on the album. Iommi has always been the king of riffs, and “Age of Reason” shows that he’s still got it. “Live Forever” follows this song, and it contains one of the catchiest hooks on 13. “Well I don’t want to live forever,” Ozzy sings “But I don’t wanna die.” He seems to have solved this dilemma by the time “Damaged Soul” rolls around, as he declares “I don’t mind dying, ‘cause I’m already dead.” The lumbering track features impressive soloing by Iommi and demonstrates some of the band’s bluesy roots. 13 closes with “Dear Father.” The song features some intense riffing and ends with the rain and church bells that opened Black Sabbath’s debut LP in 1970. This touch may be predictable fan service, but’s it satisfying nonetheless.

If there’s one flaw that can be leveled at 13, it’s that it contains no masterpieces. While the album is solid throughout, no songs rise to the level of, say, “War Pigs” or “Symptom of the Universe.” In fact, while most of the tracks are on 13 are very good, none of them are extremely memorable. But perhaps expecting indisputable classics like the good old days is unrealistic. After all, 2013 marks the 45th year since Black Sabbath’s formation in 1968. The fact that they still sound so great after all this time is extraordinary in and of itself. Ozzy, for one, turns in a surprisingly impressive performance on 13. Tony Iommi is in great form as always, and his solos this time out are particularly remarkable. Geezer Butler’s rumbling bass continues to be an integral part in maintaining Sabbath’s heaviness, and newcomer Brad Wilk takes things to a new level with his powerhouse drumming. So while 13 may not be a masterpiece, the fact that I’m even comparing it to albums like Paranoid and Master of Reality speaks to the quality of the record and Sabbath’s ability to recreate their classic sound. 13 may not be better than the best Sabbath albums, but it’s in the discussion, and that should be more than enough for any Black Sabbath fan in 2013. Simply put, it signals one thing: Black Sabbath are back.