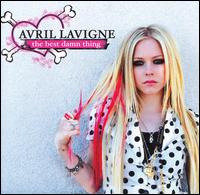 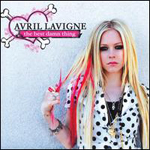 The goth phase didn’t last long and the rock chick as she names herself has went to the well-scrubbed mosh pit for her third album. It is a step forward from Under My Skin as the serious Avril never did felt genuine. The bad thing is that she now lacks the ability to act natural and the tracks are like a bright bubblegum. Makes you ask yourself weather she is a rock chick or a pop chick singing rock.

The cheerleader chant in Girlfriend is everything within Avril’s world but the weird thing is that his third album feels even more adolescent than her aggressively catchy-n-shallow debut. She does run wild and thrash everything around; she spits and swears and acts like the spoiled brat that she’s thrilled to be. The fact that she put out just there true power ballads makes it even more obvious that the album does not only lack the serious side but it makes fun of it.

She does truly believe she’s the best damn thing you’ve ever seen, she knows it’s all about her — or, as she shouts on “I Don’t Have to Try,” “I wear the pants!”. For anybody who’s just a little bit older than Avril’s 22 years then this album is not for you.

The good thing about The Best Damn Thing: it’s as exuberant, irreverent, it is silly and shallow; it takes you and does not let you go. The change is obvious and it is everything that Under My Skin was not. Guilty pleasures spoiled acts and everything that you would expect from a 15 year old.

As a debut album it would be the best damn thing but as the singer evolved we would expect that something else which takes the great singers and separates them from everybody else. That weak strength which she does have and made Let Go the huge hit it was. Also Let Go made a promise but neither Under My Skin or The Best Damn Thing rise up to the expectations. Instead she chose terrific, addictive pop songs that are harder and tougher yet feel fresher.

“Girlfriend”
“I Can Do Better”
“Runaway”
“The Best Damn Thing”
“When You’re Gone”
“Everything Back But You”
“Hot”
“Innocence”
“I Don’t Have To Try”
“One Of Those Girls”
“Contagious”
“Keep Holding On”
“I Will Be”
“Alone”
“Girlfriend (Dr. Luke Remix)” feat. Lil’ Mama