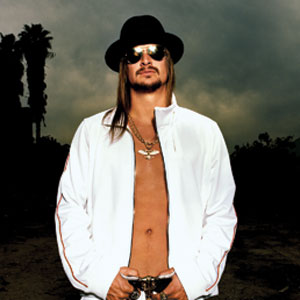 Well, according to the man himself, he has it all figured out, which is why he’s setting the studio on fire. Bad news is this means he’ll delay his tour in order to finish the follow up to 2007’s double-platinum album “Rock N Roll Jesus.”

“I really feel like I’ve kind of got this figured out,” the rapper and singer-songwriter tells Billboard. “I think I can make an equally good record, if not better than the last one – which is once again putting quite a weight on your shoulders. But I do like the pressure.”

He’s been working with the Twisted Brown Trucker Band, especially guitarist Marlon Young, who actually cowrote some of the songs from his previous release. Uncle Kracker and Al Sutton have also joined the party.

“Obviously I had a great year in 2008,” Kid Rock says, “one of my best since (1999’s “Devil Without a Cause” album) – maybe even better considering the times we’re in. We’re at a point where you do something and then it’s forgotten, and I’ll have to prove myself again, and that’s just incredible. People need to be reminded sometimes, and sometimes being humble doesn’t do that so well.”