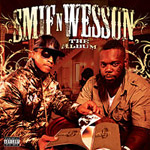 Smif N Wessun have been pretty active these few years. After fighting to get their original name back, putting out an album in 2005, and putting out two Boot Camp Click albums, Tek and Steele have been keeping themselves relevant in the hip-hop community for some time now. Two months after their group Boot Camp Click brought us Casualties of War (Duck Down Records), Smif N Wessun come together to bring us the highly anticipated Smif-n-Wessun: The Album (Duck Down Records).

Departing from their usual production team, this album is handled exclusively by a Swedish producer named Ken Ring. This new alliance brings in a surprising and dark feel to this album, which fits the duo as they easily adapt to most of the beats and also has a more original and organic feel compared to their latest Boot Camp Click album. This darker tone also replaces upbeat joints in place of more melodic and brooding tracks such as “Trouble”, and “K.I.M. 2000”, but that’s not saying that there are no banging tracks such as their first single “Gotta Say It”.

Lyrically Tek and Steele do not disappoint on this album as both provide very interesting and insightful lyrics dealing with a range of topics. One track in particular, “Who Gonna Save Us”, has Tek and Steele going back and forth as they touch on issues dealing with hurricane Katrina, the Iraq war, and black America in general. This is then followed by “Still Fighting” as they talk about the black poverty and problems in impoverished neighborhoods. This is done though not in a preachy or conscious way, but in a realistic and insightfully simple approach.

Although the album is an impressive treat it does not compare to their classic Da Shinin’. This is due to both the production and the direction they took towards flowing over some of the beats. Tracks like “Yeah” and “Cant Feel My Face” seem to have lackluster production and has the duo out of their element as they try to adapt to oddly place beats. Others like “P.N.C. 4 Life” seem to underutilize Tek and Steele’s rapping ability as they keep up with the simple and under average production.

This album shows the growth of this team. Like a lot of veteran artist, they are leaving the gritty and grimy affairs from their previous albums. They bring in a more mature, personal, and thought provoking release which is a step in the right direction. The amount of depth and diversity planted in these tracks makes this album a must buy for any fan, and is a breath of fresh air in this muddled industry we call hip-hop.