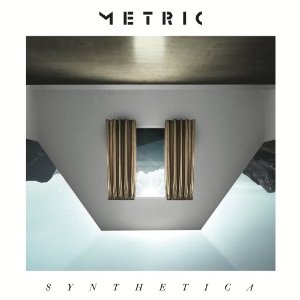 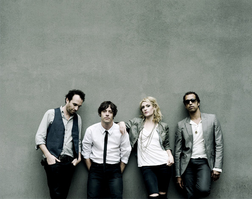 Seeing as winter is close at hand here in the Northern Hemisphere, I feel it is high time to talk about an album that was dropped at the beginning of summer.

After a nearly three and a half year break from the studio, punchy Canadian foursome Metric has returned with Synthetica, an 11-track step towards what seems like the slow but sure collision of new-wave psychedelia and haunting indie eloquence.

When I first tuned in to Synthetica, it seemed to buck up tell me outright that it wasn’t going to hold back… lyrically, at least. In all honesty, the instrumentation did not immediately draw me in. Originally, it was the lyrics alone that managed to make an immediate and unconscious impression on me. What I mean to say is that my first impression of the album was not great, as I  thought it to be somewhat ineffectual. It grew on me with a fierceness, however, once I acknowledged Metric’s continued and expected boldness in melodic statements and refusal to conform to a polished sound aimed at targeting fans. In actuality,  the album is a highly sensual and instrumentally interesting addition to Metric’s portfolio that I seem to be more and more partial to with each listen.

I mean, the first track, “Artificial Nocturne”, begins with vocalist Emily Haines‘  breathy testimonial, “I’m just as f*cked up as they say”. How is that not a dangerously  enticing lyrical hook?

That being said, it was apparent at once that this album would continue in Metric’s quest to find, create, or recreate the most poignant  phrases in the English language and put them to melodies. The whole of the album is brash and straight-to-the-point lyrically while maintaining an ultra “synthetic” sound instrumentally. This probably comes as no surprise to those of you who have been Metric fans for more than one or two of their previous albums. Truthfully, a chronological look at Metric’s entire discography (Old World Underground, Where Are You Now? to Synthetica) can only yield something of a Darwinistic image, as it seems to be in constant development and evolution… Though, in this sense, it is constantly evolving towards the rawest and (paradoxically) most synth-oriented sound one “alternative” group can achieve, not strictly what mainstream audiences demand.

If you want an album slightly less guitar-oriented than Live It Out (2005) with lyrics as artfully stripped-down as those of Fantasies (2009) that has maintained a classic Metric air and sound, then Synthetica will not disappoint. If you wanted an album to throw you for a loop at the thought of it being something of Metric’s, however, you may have to wait for the next installment.

All things considered, it certainly did not disappoint me.

To order the album, click here. To listen to a few tracks before ordering, go to Metric’s sit