His album is lengthy and poetic and sounds like the product of a boy and his guitar, and his album art looks like expired film from the 70s, screaming of fading childhood and bittersweet memories…

I found him while working my way through links upon links to artists recommended by other local artists on BandCamp.com. Though Toys in Void was on a few different lists, it seems the only things noted about him are that he is a 17-year-old folk musician named Zachary from Livermore, California,  that he runs his own personal Tumblr, and that he has just released his first E.P., which consists of five tracks and is about 24 minutes in length. To describe said E.P., Good Nights Bleed, he simply wrote, “this is my E.P. and these are songs from my E.P. and I am a rock and roll boy.”

When I stumbled upon his page, I downloaded a few tracks, in all honesty, because his album art attracted me. The photo, being shot with seemingly expired film, of a pre 70s-esque family, together albeit seemingly bittersweet, with the kids piled atop a light blue car that was probably avant-garde in the 50s, was striking; most striking of all was the fact that only half of the photo’s subjects had faces. So different was this cover than many others in the world of indie folk today that it drew me in at once.

Upon listening to the E.P., I was immediately thankful that I had downloaded the tracks. His sound can only be described as an interesting mixture of the breathy vocals of Band of Horses‘ Ben Bridwell and the acoustic prowess of a more mellow and melancholy Dallas Green (City and Colour), with lyrics as cerebral as they are  fitting and emotionally stimulating. 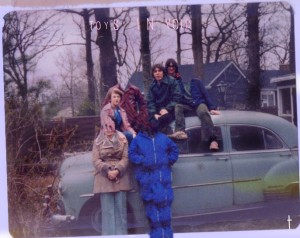 Toys in Void has something more than just talent and a way with words and melodies.

I’m not sure where to find him live quite yet, but you can find his music here.