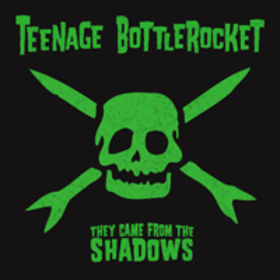 (Note: I’m going to challenge myself that I can make it through a review of Teenage Bottlerocket without including one mention of the Ramones. Besides that one).

Pop-punkers Teenage Bottlerocket are probably the best band out of Wyoming right now. Granted, I can only name one other band from the land of Jackson Hole and Dick Cheney, and the Lillingtons share a member with TBR. That’s one unfair place to start when examining a band who has been gaining traction in punk circles around the world. Fat Mike (NOFX), who has spent years championing The Lillingtons’ 1999 masterpiece Death By Television, has gotten around to inking Kody Templeman’s current band to a deal, and despite being auteurs of a musical style known for unwavering, 3-chord sonic structures, TBR have shown a good deal of maturity on their Fat Wreck debut, They Came from the Shadows.

Twin brothers Ray (Guitar/vox) and Brandon (Drums) Carlisle founded the band, releasing one slab of vinyl (Another Way) in 2003 before picking up Templeman as a second singer/guitarist, and bringing in bassist Miguel Chen, whose resemblance to… Douglas Colvin*… is almost creepy. This lineup put out two solid if not outstanding albums on Red Scare, Total and Warning Device, which sound infinitely better on a car stereo than on an iPod. Now, with their Fat Wreck debut, they unleash a record that sounds pretty much exactly like those last three, but is more consistent from top to bottom. Kody and Brandon trade vocal and songwriting duties in the tradition of Husker Du, and they provide a fine foil for one another, given Brandon’s penchant for simpler lyrics and subject matter (“Don’t Want to Go”), and Kody’s willingness to get sappy and sentimental (“Not OK” and “Without You”). Kody also contributes a pair of the album’s best buzzbombs in the painfully catchy love letters to the proverbial old school, “Skate or Die,” and “Bigger Than Kiss,” which are both full of references that can make any fan of 70’s-80’s culture laugh. “Skate” is their best album opener yet, between Brandon’s aggressive lead-in, the wait-for-it, wait-for-it bass entrance and Templeman’s lead that’s about as memorable as anything in TBR’s catalog.

Critics of this band and this style of simple, driving, 3-chord punk would deride TBR and legions of similar bands for writing the same one song over and over. But if that one song kicks ass, who are we to judge four dudes from Wyoming for having some fun? Especially if it seems like they’re really getting a hang on what makes them tick. I can’t wait to listen to this one in my car.