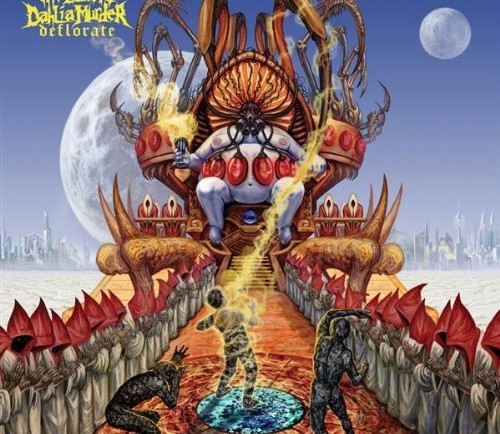 Deflorate: Past the flowering state; having shed its pollen. It’s important to note that word – important because The Black Dahlia Murder has after only four albums ascended to extreme metal’s throne. But keep in mind one thing: BDM isn’t a band in the band qua bandsense of the term. Sure, the entity is composed of five ridiculously gifted individuals making the term accurate in a sense. Yet, it would be more accurate – that is to say, wholly accurate – to call BDM a steamrolling behemoth juggernaut capable of laying waste to anything in its path, and to hell with the consequences.

With every release since its inception, BDM has always wanted take over the world of heavy metal. From the adolescence of Unhallowed to the expansionism of Miasma to the  maturity of Nocturnal, the band has been in a constant state of ascension. Each album has been great, each succeeding album improving from the last. And their newest offering continues this trend. Granted, they’ve only just put out their fourth effort, but still – a streak of engaging discs is always noteworthy, especially considering it hasn’t been broken.

It’s clear from the outset that BDM aren’t content with jogging or even sprinting towards being the metal band from America anymore – or, content with relaxing within its newfound royalty. No, the main riff from opener ‘Black Valor’ (how apt) fucking gallops the song – and, thus, the band –  forward. Then there’s the opening lyric: “We bear the bloodline of the conqueror/ Behold this war-scarred coat of arms.” You can’t get more majestic than that.

The band also has taken a more progressive approach to its songwriting, something that may anger long-time fans who long for the Patton-style attack of Unhallowed. “Necropolis” and album closer “I Will Return” both display a fresh manner with which to inject melody into its rather brutal sound, the former basking in a swaying, almost waltz-like, riff that swims around your head, and the latter containing an epically melodic opening before pile-driving your ass right into the pavement.

Then there are the solos, courtesy of newcomer (and former Arsis guitarist) Ryan Knight. They’re relatively new to the band, to be sure, and they’ve always been frantic, finger-spasm affairs in the past. Here, they’re meticulously crafted arthouse fretboard dances. The solo in “A Selection Unnatural,” for example, is technical, yes, but it’s also expressive of the overall theme of the song: a search for what constitutes human life in this world of gene manipulation (sample lyric: “It looks a monster but they swear it’s human, too/ Truth is that it could’ve been me or you/ One simple helix misconstrued”). The solo itself is a person seeking refuge within knowledge and having its search bare no fruit. Similarly, the solo in “Throne of Lunacy” acts as an aural interpretation of insanity, spiraling out of control at the beginning, then seemingly finding its center, only to spiral more violently out of control as a result. It’s gorgeous.

And, of course, Trevor Strnad’s lyrics make each BDM release worth a purchase all by themselves. If you’re familiar with Trevor’s musings, then you know every BDM record has that one quasi-‘story’ song the contents of which are simultaneously disturbing and oddly relatable. This time around, it’s the penultimate track, “That Which Erodes the Most Tender of Things.” The title is almost a poem by itself. The song discusses a mother loving her child (or, as Strnad puts it at the end of the song, “her putrid rotting son”), even if said child is dead. Strnad details the love of a mother-child relationship, even when all there remains is “a hollow gaze” peering back from “just sockets.” Yet, the mother can imagine and picture the (former) eyes of her baby. Yikes.

I can’t imagine a metal album that has captured my attention as stringently or thoroughly in recent memory (besides the last Opeth record) the way that Deflorate has. The Black Dahlia Murder are experts at forcefully shoving their (exceptional) music down our throats – and somehow we still come out enjoying every moment. That’s not talent. That’s god-like ability.