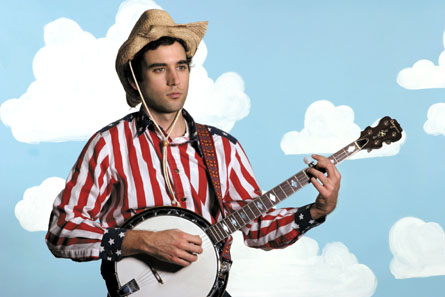 Sufjan Stevens once had a plan so ambitious, so preposterous, that it seemed like one of those ‘just crazy enough to work’ things – write a concept album about each of the 50 states. He started off with the midwest when he released the lush “Michigan” in 2003, before carrying  on with the magnificent 2005 “Illinois”, which, among other gems in the tracklist, features “Chicago”, Sufjan’s best song to date by far! Something happen afterwards, though, or should I say nothing happened at all since nothing was heard about the project from there on.

Speaking about Project U.S.A. with Paste Magazine, Sufjan said: “the whole premise was such a joke,” he says now, “and I think maybe I took it too seriously. I started to feel like I was becoming a cliché of myself.” Well, at least the man REALLY believed he could pull this off. Any five year old with basic math knowledge could tell you its almost impossible to pull off – not if you want quality, that is. If Sufjan was to release, let’s say, an album a year, which is pretty often at is, he would still need 50 years to reach his goal. I’m still rooting for a Iowa album, though!

Putting this ‘minor’ set back aside, Sufjan still remains one of the most ambitious and innovative artists in the indie scene today, and his latest release goes to prove just that. Last month, he finally got around releasing the years in the making “The BQE” – a  mixed-medium artistic exploration of the Brooklyn-Queens Expressway. Actually, it’s The BQE that more or less killed his USA project, draining him on all fronts. “In all honesty, that piece is what really sabotaged my creative momentum. It wasn’t Illinois so much,” he says. “I suffered sort of an existential creative crisis after that piece. I no longer knew what a song was and how to write an album. It overextended me in a way that I couldn’t find my way back to the song.”