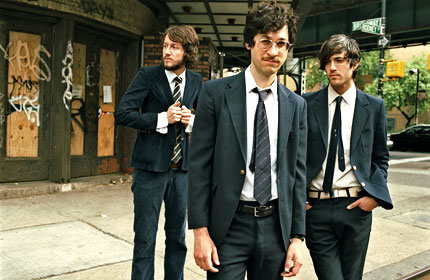 The guys down at CMJ caught up, in between recording sessions, with [tag]We Are Scientists[/tag] frontman Keith Murray. The indie trio are currently working on a new album, follow up to last years great LP “With Love And Squalor”, in Sausalito, California recording studios. The current working title is err… “What $ Of $ Do That Cost”, other titles they’ve thought of are “Fluffin’ Tha Cushions” and “Onlookerswatchedinhorror”. Boy these guys sure are wacky scientists. Anyway bellow’s a snippet of the interview, be sure the read the whole thing here.

Keith: “It sounds like it was made by perverted wizards. It’s still pretty poppy, but far less reductive than our last album. We’re sort of screwing ourselves with the arrangements, but it’s much richer and thoughtfully layered… Needless to say, after playing the same songs every night for the better part of two years, anything new sounded amazing to me. I would lazily strum my guitar while watching TV and then automatically declare whatever progression I happened to half-consciously conjure to be a Top 40 single before someone nearby would note that I was holding the instrument upside down. But I got over that little honeymoon pretty quickly and I can now assess the new stuff with clarity, if not actual objectivity… I’ll admit that it sounds both self-serving and hackneyed to posit that this new stuff is by far the best music we’ve ever produced, but that happens to be true, so, in this case, I’ve been led into cliche by simple fact. “