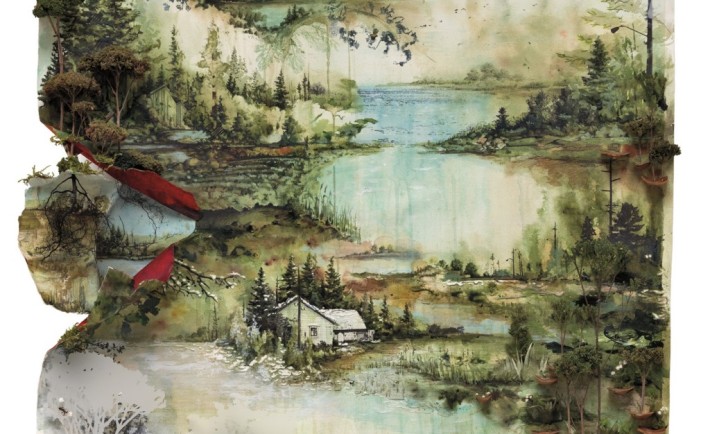 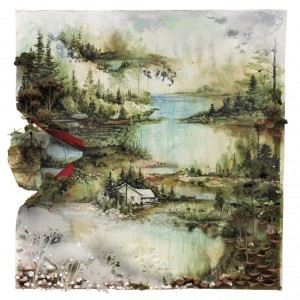 The self-titled second album from Bon Iver, aka Justin Vernon, is what some may consider to be one of the masterpieces of the 21st  century, consisting of ten beautiful, emotional, and ingeniously thought out tracks.

This album being his second and not having an actual title may be considered strange. Along with the album cover- a painted landscape with a log cabin surrounded by trees and water, this makes for a fairly mysterious first impression. However, as soon as you listen to the opening track, Perth, everything becomes clear. The atmosphere created goes perfectly with the mood of the artwork, and you realise that the album title needs no further explanation. The solitary electric guitar accompanied by the vocal harmonies and percussion create the feeling of confinement, such as the wood cabin in the landscape. We immediately understand the simple title is all that is needed. As the track continues, the crescendo of volume and build up of instruments begin to create a picture in your mind of seclusion and the madness that comes with it- all in a perfectly calculated way.

The rest of the album is very similar to this in places, yet surprisingly different in others. The track Hinnom, TX, demonstrates use of effects and delays that hypnotise you into a trance-like state that you do not want to leave. The two singles on the album, Holocene and Calgary, are a pair of very contrasting songs. The first, Holocene, shows off Vernon’s genius, advertising his ability to use just his voice and guitar to mesmerize the listener, with only faint percussion and the roll of a snare drum in the middle of the track, followed by horns at the end. Calgary is just as captivating, yet is much less of a small sounding song. Starting with a horns section congregating and playing a very simple melody, and then Justin Vernon’s vocal on top. It continues, adding various percussion, until leading into the next section, primarily played on a distorted electric guitar. With Vernon crying the words ‘There’s a fire going out/but there’s really nothing to the south’, this track builds up to something of raw passion.

Overall, this album is something that should be celebrated, and the poignancy conveyed brings great satisfaction, due to there not being one track used as a ‘filler’, and each one having been designed so skilfully. Contrasting the critically acclaimed debut album, in which every track is inspiringly minimal, this one is teeming with guest musicians contributing horns sections, strings, and major use of percussion. This all goes together, along with the enchanting falsetto and vocal harmonies of Justin Vernon to produce something that will send chills down your spine throughout every listen, and stay with you for a long while.

Bon Iver is a man that has the ability to touch people in a seemingly effortless way, and this album is a perfect example of how he manages to do this.