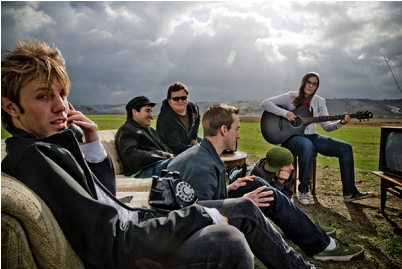 Good Morning Milo is an alternative rock six-piece from San Diego, who may sound like other bands your hear on mainstream radio, but they’re indie, so they’re still way cool. I’ll be the first to confess that I am a fan of their Panic at the Disco-esque sound (you’ll hear it most on their song “Engaged”), even though I’m in no way a fan of Panic at the Disco mostly because their fans annoy me. If you feel the same, Good Morning Milo is the band for you!

Their latest album, Through the Chaos and Clatter, has a great mix of diverse tunes. Not diverse in the way that they don’t know what kind of music they want to make, but diverse in the way that they want to give each song its own identity. Keeping everything tied together are the similar song formulas and signature vocals, (which we’ll get to in a second).They even include a couple of nifty instrumental tracks, “Pickup Lines” and “The Proposal.”

Usually, I would say opening an album with an instrumental track is indulgent for most bands, but for Good Morning Milo, it’s a slick move, especially since they keep it under a minute and a half and dive headfirst into the next song on the album “Win Her” that has no intro whatsoever.

One of my favorite things about Good Morning Milo is Weston Gardner’s vocals. He keeps in non-whiney and involved, crystal clear for lyrics sake, and impresses with a tasteful falsetto. The rest of the band members also pull their equal share of the weight, even Ren, the girl in the group. Not that she wouldn’t, I’m just saying, it’s nice to see a girl in the band that isn’t the singer.

Anyway, where was I, yes, there’s a beautiful piano intro on “Feel The Crash” and is a welcome change from the other guitar-driven tracks. Bass and drums keep everything dynamic and interesting. The guitar parts are varied and appropriate. There’s nothing I hate more than a guitarist that wants to steal the show with some crazy ass guitar part that is too elaborate, thankfully, Peter Begle isn’t one of them. Oh, and kudos to whoever is participating in all those harmonies, I love ‘em.

All of the songs on the album are of the same caliber with their being no clear hit, but no filler tracks either. Like I said, if you’re a fan of their style of music, you’ll appreciate it for what it is, textbook alternative rock, done well with a few bonuses.