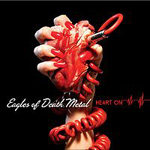 Eagles of Death Metal - 'Heart On'

The self-confessed Dream Boys have produced a third offering to remind us why Eagles of Death Metal are everyone’s favourite old school rock outfit.

Following the ludicrously superb Death By Sexy is no mean feat but Heart On just about pulls it off and is further proof of Joshua Homme’s midas touch. Starting off in true Eagles of Death Metal style with “Anything ‘Cept the Truth”, a real grower with a chorus destined to lodge in your brain, the trademarks of this project are quickly unleashed – raunchy, old school rock n roll with lyrics about brother love and lady worship.

Unlike most albums that require repeated listens to really catch your ear, even the most averse listener will be automatically pulled in to the seedy but fun underbelly of Heart On. Stand out tracks include the funky title track and the excellently old school “Cheap Thrills” featuring the ever-faithful Eagle-ettes (most notably, Homme’s real life partner in crime, Brody Dalle, formerly of The Distillers). “Prissy Prancin” sees Jesse Hughes (AKA Boots Electric) tread the familiar boards of falsetto vocals and is bolstered by enough 70s inspired rhythm to shake your hips to. “Secret Plans” is a rapid-fire rock out assault and wins the title of most singalong number contained here.

The memorable ditty “Wannabe In LA” is followed in quick succession by the attitude-infused “Tight Pants” with its fun and funky beat marking it out as an instant favourite. “Solo Flights” is marked by Hughes’ somewhat anguished wail in a tale of former lovers’ revenge, reinforced with the contagious hook of “you don’t get it”. “I’m Your Torpedo” commands the listener’s attention by beginning with a frantic beat that confidently backs the sexed up lyrics. Despite the vibrancy of the more in your face tracks, the pivotal track on this third release is the soulful “Now I’m A Fool”, which sounds unlike anything EODM have produced to date. Cleverly positioned halfway through the record, this tune stands out with its wistful guitar parts and lulling melody and manages to redeem the “Dream Boys” and remind us that despite the jokes, they are musicians – and good ones at that.

Heart On displays the progression of EODM from their Desert Sessions debut towards stepping out from under the Queens of the Stone Age shadow into an identity of their own. With song titles like “Tight Pants” and “Prissy Prancin” it is all too easy to dismiss Hughes and Homme as an overplayed comedy rock gag gone wrong. The reality is that behind the masquerade of cock rock posturing, Eagles of Death Metal simply rock – their inimitable blend of infectious melodies and tattooed attitude is exactly what rock should be. If you like your rock ’n’ roll dirty and fun then Heart On is the essential soundtrack your life has been waiting for!