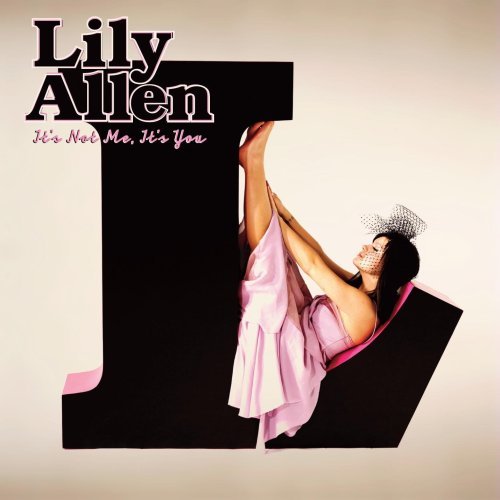 Lily Allen’s debut album, Alright, Still was something of a guilty pleasure for me, even though it shouldn’t have been all that guilty at all. It was an unabashedly great pop album (and one that spawned too many imitators, of which only Kate Nash was tolerable) but that fact always managed to hide beneath a thick layer of tabloid gobbiness on Ms Allen’s part. The interim between then and now has been frought with personal difficulties for the lass – break-ups, miscarriagies, failed chat shows… y’know, the usual popstar stuff. So how does It’s Not Me, It’s You, her sophomore album, stack up?

Pretty well, on the whole. It’s an understandably aggressive piece of work, lashing out at everyone from a boyfriend who’s lousy in bed to infamous racist British political types, the British National Party. It starts with a knowing look at the drug-infused celebrity culture, Everyone’s At It – slightly hypocritical for someone so visible on the party scene, but she gets away with it by making it an undeniably great song, damn her eyes. Indeed, the opener, and follow-up The Fear are two of the standouts of the record, with The Fear coming close to being three minutes of pitch-perfect pop.

It sags somewhat in the middle, admittedly – I Could Say, Back to the Start and Never Gonna Happen are decent songs, but somewhat samey, and certainly not of the same calibre as the rest of the album. And the catchy, irrepressible refrain of Who’d Have Known is clearly lifted from Take That’s Shine. Then again, if you’re going to rip off a chorus, why not go for the absolute greatest chorus of the 21st century?

But any gripe you might have with the album is forgiven when the sweet, Carpenters-esque keyboards kick off a storming tirade against awful, racist politicians, in the bluntly-titled Fuck You. The riff is all but sampled from Close To You, but it’s brilliantly punctured by outraged, piercing lyrics, like:

Do you get a little kick out of being small-minded?
You want to be like your father
It’s approval you’re after
Well that’s not how you’ll find it

Fuck you (Fuck You)
Fuck you very, very much
Cause we hate what you do
And we hate your whole crew
So please don’t stay in touch

Nothing following that can really match it for sheer brilliance, but I have to mention Him, the obligatory deep, God-questioning song. (Every artist will pull one of these out to make themselves look a little smarter than your average bear.) And this is routinely safe stuff, make no mistake, until you hit the chorus: “Ever since he can remember people have died in his good name, long before that September, long before hijacking planes.” It’s refreshingly to-the-point, and it reinforces one of Allen’s greatest assets: her no-nonsense, straight-talking lyrics. She doesn’t sugar coat, and she doesn’t mince words. And she also wonders if God’s favourite band is Creedence Clearwater Revival. And let’s face it – it probably is.

So, it’s probably not as good as Alright, Still – there’s nothing quite as spectacular as LDN here, even though The Fear comes close – but it’s still a damn fine album, and certainly nothing resembling the train wreck you’d have expected if you were following her very public meltdown over the last two years. Match that, Winehouse.

(Also, if you don’t agree that Take That’s Shine is the greatest chorus of the 21st century, you’re very obviously wrong [and ugly], and equally welcome to try to prove me wrong in the comments bit below.)