Rock n’ roll is a wonderful, chaotic beast. Borne of a decadent tryst between blues and boogie, it’s grown from its simple, Chuck Berry beginnings into a many-tendriled monster, sprouting new bands and sub-genres from every possible pustular orifice. And while a lot of the descendent bands have grown up to be hideously ugly and malformed (just look in the metal section of your nearest endangered music store), some of these bands cling to the ever-beautiful original ideals of rock n’ roll: exciting, pulsing music, full of vigour, ego, humour, and raw sexuality, like a musical version of Gregory House. The Eagles of Death Metal, however, don’t just cling to those ideals – they ride bareback on them.

But before we get to the Eagles’ majestic show, a brief moment of undiluted negativity: the support band – Belfast’s Panama Kings – were inexcusably woeful. They plowed ponderously through an unappealing set, composed mostly of indistinct indie-rock mulch, before a disinterested crowd who clearly knew better. On top of all of that, they were fronted by a lead singer who somehow looked like a member of the Kings of Leon dressed up as a sex offender Dog The Bounty Hunter might chase down, and spent his time wailing like a banshee with haemorrhoids. The only thing they have going in their favour is a talented drummer, which does give rise to interesting parallels with the Arctic Monkeys: two great drummers wasting their time with rubbish bands. Unfortunately for the Panama Kings (and fortunately for the rest of us), I doubt Monkeys-esque fame is on their horizons. 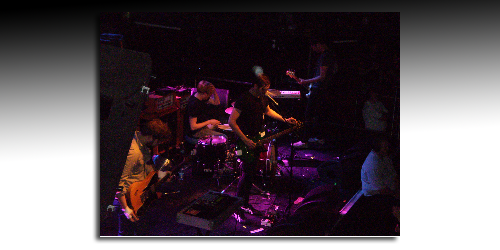 Luckily, the putrid, acidic taste of the Panama Kings was washed out by the arrival of the headliners. Strutting on stage to the sweet strains of Kool & The Gang’s “Ladies’ Night”, the Eagles of Death Metal were immediately in command of the entire assembled throng. Charismatic frontman Jesse Hughes tore around the front of the stage, slapping five with the audience, and working the crowd into an adulating lather. Best of all, he was sporting the most impressively bombastic moustache/shades combo this side of Magnum P.I. era Tom Selleck.

Here’s the thing: it’s very easy to focus on that side of the Eagles of Death Metal. Here’s what most people know about EODM, if anything: they’re a jokey sideband that Josh Homme plays drums for. They make funny videos, and have funny facial hair. And they have an impressive list of guests on their albums, running the gamut from Jack Black and Dave Grohl to Mark Lanegan and Brody Dalle. Throw a stick at the Desert Sessions/QOTSA revolving-door line-up, and you’ll probably hit someone who’s guested on an Eagles of Death Metal record. (Although, given the QOTSA line-up, they’ll probably take that stick and beat you to death with it.)

What gets lost in that summation – although admittedly, it’s somewhat fair: it’s not like anything in that paragraph is inaccurate – is that the Eagles of Death Metal are a damn fine rock n’ roll band. Jesse Hughes is the prototypical rock frontman, as prone to shaking his ass as he is to playing a searing guitar lead. And the Eagles’ touring line-up sees him flanked by an impressive cast: the tremendously talented Dave Catching on lead guitar, Brian O’Connor on bass, and the whirling dervish that is Joey Castillo on drums. In between the bonesaw-boogie riffs and good-kind-of-dumb singalong choruses, Hughes was either complimenting the beautiful ladies present, posing for pictures with the aforementioned ladies, or asking “Can you dig that?” This is Americana. 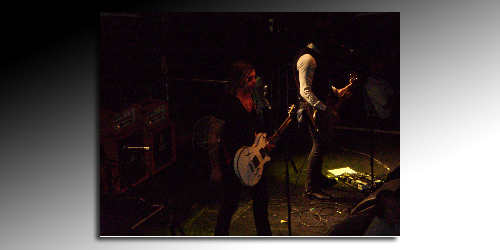 The songs, while certainly all of a piece, were highlighted by some choice numbers: obvious hits like “Cherry Cola”, “Want You So Hard” and “Only Want You” were immediately popular, and blues romp “Chasing The Devil” was given its live debut to a rapturous crowd. What really wins the Eagles of Death Metal their fanbase is the sheer delight and enthusiasm with which they infused every last song – there was a clear focus on fun and good times that wasn’t lost on the Academy’s crowded floor, and they rewarded the band with a loud, passionate “Olé” chant in between sets. Hughes was clearly appreciative, calling this show – the only club stop on their current tour – the best he’s ever played. An easy way to raise a cheap ovation, for sure, but the astonished look on his face made it at least appear to be a genuine sentiment.

And that was the show. A bar-rock band, playing their simple rock n’ roll to a small club full of singing, dancing fans. Nothing more important than a damn good rock show.

And what could be more important than that?