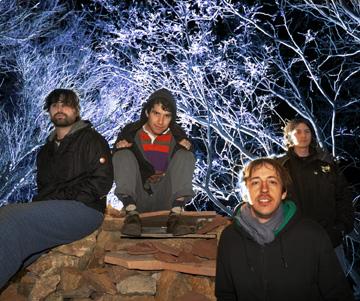 Seeing how 2009 was an incredibly intense year for Animal Collective with the release of Merriweather Post Pavilion and lots of touring, and the fact that it was followed by an even more intense 2010 filled with more touring and multiple solo projects, the last one just recently released to critically acclaim by Panda Bear, it’s a bit of a wonder how the band can still boost this kind of creative energy.

It was actually last year that Lennox and Portner mentioned plans for Animal Collective’s next album, including writing all together in the same location and the possibility of recording the new songs before taking them on tour. The band had a short tour of California leading up to an appearance at the recently concluded Coachella Music Festival, where at the shows, the band mostly played their newly written songs that were yet to be recorded.

All of these mentioned earlier seem to hint to an imminent new AC record release in the near future, fact which couldn’t make me, and I’m sure, a lot of you ZME readers out there very, very happy. And whether you’re in Europe or America, you can rejoice equally as much since the band will soon head out on a summer tour on both continents, where they’ll likely play even more new songs.

The first European leg of the tour will begin in mid-May in the UK where the band is expected to play a few dates, after which they’ll extensively travel and play across Germany, Spain, Italy, Croatia, Poland, Belgium, Holland or Austria. Think this is their most diverse European gig sting. Anyway, the second leg of the tour, the US one, will start in July with only a handful of dates announced so far, the first one at Orlando’s The Beacham Theatre, but with more to be reveled in the future for sure. What’s interesting is that the band will also play Merriweather Post Pavilion, the Columbia, MD stage and the namesake of their eighth studio album, on July 9th.

Check out a video of the band playing a new song, plus Summertime Clothes below and right after the jump you’ll see the full Animal Collective 2011 summer tour dates.