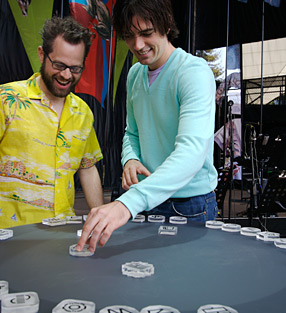 It seems that [tag]Bjork[/tag] has come across a very nifty musical gadget: “the reactable“, which she’s going to use in the upcoming [tag]Volta[/tag] tour. The very sophisticateddevice has been developed by a group of digital luthiers at the Audiovisual Institute at the Universitat Pompeu Fabra in Barcelona. It’s basically consisted of a glowing round tabletop on which and blocks that are placed on its surface, each block represents a sound, a sample or a filter that can augment anything else on the tabletop. The sound that the blocks make depends on how the blocks are moved and the sonic nature of the blocks.

The islandic diva Bjork, after a first hand demonstration of the reactable’s capabilities, decided she had to get one. The thing is that it’s a very experimental device, as there are just 2 reactables in the whole world and one of them is being borrowed by Bjork, so i guess she’s gotta be very careful. Weather this “instrument” will make it to mass production and revolutionize the music is still very unlikely, as i find it to be more of a gadget, then a musical piece.