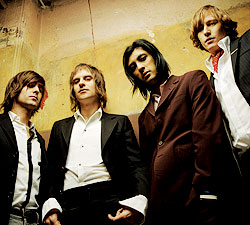 East London indie quartet Boy Kill Boy is set to embark on a short trek across the UK, in which they’ll showcase some new tracks exclusively for their fans. The songs are part of BKB’s still untitled second album, follow-up to their successful debut record Civilian, set to be released by the end of the year or early 2008. The short UK tour will start in late October, right after they’ll release their first single, from the forthcoming album, called “No Conversation“. And the dates: