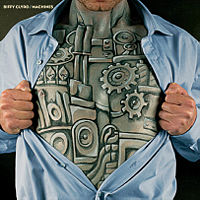 [tag]Biffy Clyro[/tag] has always been notorious for their energetic and raw videos, like Semi-mental or Saturday Superhouse, but this time its a bit different. Their latest video “Machines“, the fifth single of Puzzle, is a lot slower then Biffy has accustomed us to, very static and emotional, packed with Simon Neil’s shivering and beautiful voice and acoustics. The powerful lyrics ( i would dig a thousand holes, to lay next to you) are meant to express Simon’s deep pain as a result to his mother’s tragic death, losing his feelings and emotions, becoming in essence a “machine”. The video it self features the band members half naked, suspended by some wires, in a apparently empty high-tech enclosure. Mon the Biffy!