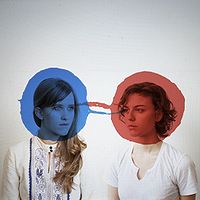 What’s possibly one of the most weirdest, yet at the same time ridiculously catchy indie acts of the past couple of years, Dirty Projectors never ceases to amaze us. Be it Dave Longstreth’s uncanny attempt to recreate Black Flag’s iconic Damaged after not listening to it for over 15 years (see the fantastic “Rise Above”), or previous material that jumped from one point to another becoming either fascinatingly absorbing or practically unlistenable or the band’s pop intentions (Thank God for Amber Coffman and Angel Deradoorian’s voices), it’s hard to get bored listening to the Dirty Projectors. Actually, now that I think of it, maybe this is why I’ve fallen in love with “Bitte Orca.”

It’s all these listed above and much more that gets embowered in Bitte Orca’s precious nine piece tracklist – it’s weird, but fun, it’s a total mind fuck fest, while still managing to float listeners to the most peaceful corners of serenity, it’s an experimental record, but with one of the best pop hooks I’ve heard in years. Don’t tread lightly though, this is not by any means Dirty Projectors’ transition to pop. Far from it.

One could say Bitte Orca is the band’s best and most accessible record to date, and I wouldn’t argue too much truth be, but labeling it as either “accessible” or “pop” is plain wrong, simply because it isn’t. Bitte Orca is a very intricate record, with incredible moves of tempo, packed with layers, upon layers of sound of the most diverse kinds – basically, it has Longstreth written all over it.

The record opens up with the surprising summer jam “Cannibal Resource,” which entices listeners from its very first chords to strip off any care and just groove to the harmonies. “Temecula Sunrise” and “The Bride” features some incredible drops and ups of tempo, leaving us most of the time with a sense of “what the fuck’s going on?”, but it’s all very well carried such that you’re not left with your hands all over your ears like in the case of other experimental flatulations.

It’s hard picking a highlight out of these nine incredible songs, since each can easily become a person’s favorite. For me, I think my personal favorite changes from spin to spin, however it’s really hard not to hail “Stillness is the Move” as 2009’s official pop hymn. R&B-like beats and mesmerizing guitar chops, coupled with Amber Coffman’s high pitched vocals make Stillness is the Move sound more like a sugary coated pop song off Maryah Carie’s catalog, without the MTV fathom. On the soothing “Two Doves” vocal duties get switched to siren Angel  Deradoorian, who accompanied by an eerie acoustic guitar and some strings, manages to sing out an incredibly beautiful summer garden ballad. What’s interesting to note, though, is how well Lonstreth managed to divide vocal duties between himself and the girls, allowing room for some great experimentation.

If anything, “Useful Chamber” could easily be considered the best track to sum up the uneasy eccentricity of Bitte Orca, It first starts off with Bjorkian synths, as Dave Longstreth lays down some of his most clear and calm vocals to date, before all hell break through that is, as wacky and totally unplaced arrangements all fall in into one single whole, as the mind numbing “Bitte Orca, Orca Bitte, Bitte Orca, Orca Bitte!” chorus keeps pounding your head off. After the song’s climax is reached, everything falls into a state of bliss as Angel and Amber backup Dave’s lyrics with the most of serene uh-ahs, before, once again, Useful Chamber enters a state of madness, as Longstreth churns in one of his signature solos, seemingly picking every note off the fretboard neck.

There you have it, my two cents. I well believe Bitte Orca to be one of the few complete records of the year, next to Animal Collective’s Merriweather Post Pavillion or Grizzly Bear’s Veckatimes – the matured fruit of countless inconsistent gems.