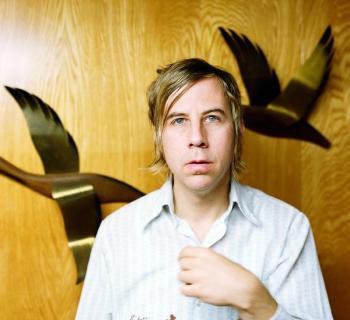 Arguably or not, the most nicest guy in the indie scene, John Vanderslice, is on the brick of releasing yet a new record, his seventh – “Romanian Names.”

Both me being Romanian and the album’s title  have nothing to do with the music itself or any influences it may posses, although it would’ve been nice to hear a melodious repertoire of consequtive Romanian names: Ion, Gheorghe, Andrei,  Marius, Maria, Alexandru …. Tibi :).

Instead, what JV wanted to pull off with this LP was this:

“On a superficial level, my goal was to write a bunch of shorter, faster songs that were all about melody lines. It was just about vocal melody and developing harmonies and making a pop record.

Mission accomplished if you ask me. Just follow his live bootlegs, that feature Romanian Names tracks, on You Tube and you’ll see what  I mean. His latest single, “Fetal Horses,” is somewhat longer, but trust me, you’d wish it lasted an eternity after you first sample it. A perfect example of JV songwriting – catchy hooks, beautiful harmonies, multiple instruments and soothing vocals. Beautiful.

Romanian Names is out May 19th on Dead Oceans.