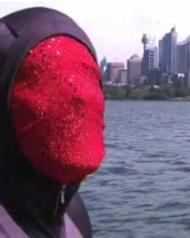 The black bodysuit man has now become a motive in its right word for of Montreal, since he’s been making cameos in almost all of their shows. Actually the man in the suit is Kevin Barnes’ brother, David, who from time to time likes to alternate the suit with a satyr-like wardrobe. Seems like David isn’t limiting himself to shows either, as he’s the featured star in of Montreal’s latest video for “Mingusings,”one of my favorite tracks off last year’s “Skeleton Lamping” LP.

In the video, David can be seen doing all kinds of crazy shit, be it steeling PC monitors through a chimney, dancing through arcades, engaging in aboriginal cultural activities or just splashing some waves in Sydney. Groove on, Dave!

Mingusings is off the 2008 critically acclaimed Skeleton Lamping  out now via Polyvinyl. [as seen on stereogum]