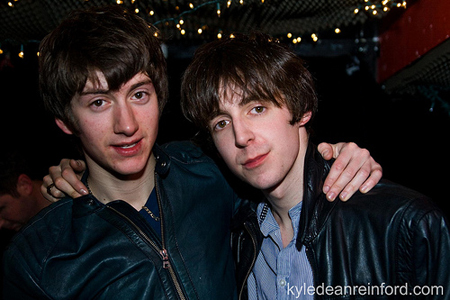 The Last Shadow Puppets are Miles Kane (from The Rascals) and Alex Turner, the famous Arctic Monkeys frontman and lead guitarist. Very close friends ever since Arctic Monkeys toured with Kane’s previous group, The Little Flames, the eclectic duo felt so great jamming together, that they decided to devise a cunning plan.

That very plan is The Age Of The Understatement, is an album of 12 full-blooded songs, bold and brassy, full of drama, wit and melody, that source the past but avoid falling into pastiche. Expect this to be a very soulful and thrilling album, after all young blood flows through the two talented musicians, Miles and Alex being 22 and all.

The album was recorded at Black Box Studios near Nantes, France in two weeks during the summer of 2007, James Ford (Simian Mobile Disco) manning both the producer’s chair AND the drummer’s stool. The band then approached Owen Pallett of Final Fantasy to arrange and conduct the orchestration of the tracks, which were recorded by the 22-piece London Metropolitan Orchestra at British Grove studios in London over Christmas.

The Age Of The Understatement is out in the UK & Europe April 21st and in North America on May 6th on Domino. Bellow you can listen and download two mp3s, including the leading single “The Age of the Understatement.”