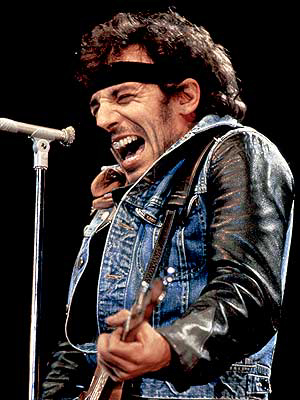 I’ve told you before… we don’t do politics. Not here. We don’t pick sides, we’re not from America, not republicans not democrats not anything. Although music has some common points with politics we’ve avoided them as much as possible. But when a music titan such as Bruce Springsteen, whose music is oh so political says Barack Obama “speaks to the America I’ve envisioned in my music for the past 35 years.”, something’s worth looking at it.

We’ve all listened to his music, and it’s great! But it always seemed to me that the USA he describes is more like a fantasy, and less like reality. Recently, in a letter addressed to friends and fans posted on his website, Springsteen said he believes Obama is the best candidate to undo “the terrible damage done over the past eight years.”

The New Jersey bard is known for his lyrics about the struggle of the working class average man especially in the economically ravaged factory towns of the Northeast. What’s even more dignifying for him is the fact that he didn’t take a shot at Senator Hillary Rodham Clinton, Obama’s rival for the Democratic nomination, in his letter.

“Critics have tried to diminish Senator Obama through the exaggeration of certain of his comments and relationships,” Springsteen wrote. While these matters are worthy of some discussion, they have been ripped out of the context and fabric of the man’s life and vision … often in order to distract us from discussing the real issues: war and peace, the fight for economic and racial justice, reaffirming our constitution, and the protection and enhancement of our environment.”