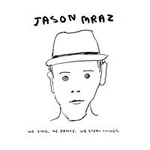 Jason Mraz - We Sing, We Dance, We Steal

WSWDWST is not as acoustically driven, with less attention given to the guitar, and even the live band feel. Many tracks have hopped onto the electro, keys, and perhaps even drum loops funk train and left behind what Mraz usually churns out. Instead of the typical love songs most mainstream music is all about, lyrically wise, he has proven that he can be the wizard of ‘oohs, ahs and fa-la-las’. From a heartfelt song about his parents’ divorce, to a song capturing the sad reality and magnificence of nature, to a simplistic and being in love with a best friend song, it’s covered almost everything; just like life. The album could possibly be the soundtrack to life itself; after all, we all do try and sing, dance and steal things.

Jason’s voice has a way of pleasing you, with an air of mellowness, sweetness clarity and sincerity. With his smooth easy-listening vocals and the ability to rap and scat with great ease, the album can be listened to over and over again, even if there were songs that don’t appeal to your ears.

The opening track “Make It Mine”, a great big favourite of this reviewer, wasn’t too impressive with its intro, but still worked really well with its psychedelic, almost disco-like, piano madness. It’s a great waking up, upbeat track, with the Grooveline Horns making their debut, with plenty more to come, appearance on the album. The colourful, dreamy and uplifting song encouraged by the jazzed up solo horns feels like you’re in a kaleidoscope, turning and dancing, constantly changing.

The two more mainstream and commercialised sounding tracks, “I’m Yours” and “Lucky”, are simpler musical arrangement wise. “Lucky” features Colbie Caillat on vocals, and the duo’s voices blend in beautifully, allowing the harmonies and voices to carry the song through, instead of relying on instruments.

Moving on, just like life, after being lucky in love, enters the most sensual song on the album, “Butterfly”. Described by someone as a ‘steamy fuck me song’, the storyline flows well from the previous track doesn’t it? One of the sexiest, grooviest tracks on the album, Mraz’s smooth vocals comes in with ease, and starts off slow, like the song. Driven by mainly live instruments, and an abundance of horns, Mraz has really entered the adult contemporary genre. He’s achieved the goal of writing a stripper song, crafting a crude and straightforward subject around this ring of metaphors and innuendos to make it sound like sweet poetry.

Slipping into a less pleasing and confusing style, “Live High” has an annoying twangy guitar or dobro-like instrument that seems kind of out of place in the song. Instead of its gospel motivated ideal, the twangs made it sound too Country. The song is just what we need to sing to the world, as it talks about gratitude and to “live high, live mighty, live righteously”, but is being let down by the arrangement. The music is competing with his voice, overpowering Mraz’s vocals at times.

Again, the musical arrangement in “Love for a Child” defeated the purpose of the song [about his parents’ divorce]. The song builds up with strings, but then gets overpowered once again by the multiple instruments. Mraz’s falsetto rings beautifully at the chorus, but most of time masked by the music, so you barely hear the strength of it.

“Details in the Fabric” is a collaboration with James Morrison, a two men duet singing a song for another man. As gay as that sounds, it’s all about a best friend’s love and it translates so beautifully in this song. With voicemail recordings by one of Mraz’s best friends opening and wrapping up the track, you see Mraz’s honesty in the lyrics and the love for a friend. Morrison’s husky and tender voice was a perfect chosen partner for the track as it adds onto the melancholy and emotional power of the song.

The album then gets past its moody stage, and starts picking the pace up again with “Coyotes”. It’s too much of a mixed bag sometimes, with an electronic sound, operatic stint, and children’s back up vocals all on the same track. Still got a great beat, funky sounds, just too many things packed in one track.

More upbeat songs continue, from “Only Human”, a Mother Nature needs our help track, to the great rapping track “Dynamo of Volition” that implements a lot of keys, creating a very Jamiriquai effect. “If it Kills Me” is too cheeky to the liking, music arrangement wise. It doesn’t seem like it’d kill him as much as it does when he sings it live, but perhaps Mraz meant to keep the cheeky side of the song in the album. Once again, a lot of his vocals get drowned out by having too many instruments fighting for the best spot.

Closing up the album, they’ve managed to perfect it with “Beautiful Mess”. As usual, wished he’d keep the intro he plays in live shows in there, but this works so well with the strings, building up the empowerment of the song. Lyrics are pure gold, as always, like “tides they turn, hearts disfigure, but there’s no concern when we’re wounded together”. Instruments start off really nice, subtle, and quiet enough to allow Jason’s soft vocals to come through. Jason’s mentioned that he loves playing this song in the morning. This reviewer loves waking up to it. The song’s full of contradictions, evokes a very melancholic emotion, but won’t leave you depressed the entire day. Instead it’s the kind of beautiful sad love song that makes you think about the good times, and embrace the hurt, but remember where the love was once long ago. There’re some songs that really capture you in your heart and your mind, so much that when you’re singing or listening to it you feel like you’re on an entirely different world, you feel the words, and are transported into a whole new echelon. This is one of those songs.

The album has its ups and downs; maybe that was the whole point of it, a life story in an album of 12 tracks. Of course, albums once again don’t do justice to live musicians; it’s an entirely different experience, so go check out Jason Mraz when he’s on tour because he will not disappoint.