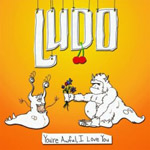 The St. Louis power pop quintet have been gaining a lot of ground lately, getting more and more airing space on the radio, increasing their fan base day to day and of course gaining a lot of exposure on music blogs. In a nutshell Ludo could be described as a Queen/Weezer’s bastard son, or well daughter depending how you look at it. It’s that somewhat unique mixture of Freddy Mercury‘s flair and Rivers Cuomo‘s humor, that makes the band an awesome power pop act. “You’re Awful, I Love You,” follow-up to their previous “Broken Bride” EP, is Ludo’s third album and the band’s first major label debut via Island Records.

If I had to describe You’re Awful in one word the first thing that would pop out to mind would be “fun.” There’s a lot of catchy tunes, that coupled with some humorous/silly lyrics (“I was driving out of there as fast as a Camry could! ” on Topeka), make for a very entertaining experience. The band’s not all show and laughs though, like one can see on the Your Awful’s opener and lead single “Love Me Dead,” a excellent pop anthem, with some great hooks and a very catchy chorus (“Kill me romantically. Fill my soul with vomit, then ask me for a piece of gum. Bitter and dumb, you’re my sugar plum. You’re awful, I love you”). The video‘s great too.

The album continues in the same idea with “Drunken Lament,” great hooks, well played guitar riffs, some nifty Moog synthesizers and of course Andrew Volpes weary vocals make up for a catchy tune. Unfortunately the rest of the album goes a bit downhill from here, after it hits a bunch of clichés and gets highly repetitive. There’s still a few good songs in the album left, like the energetic “Go-Getter Greg” or the band’s most decent take at a slow song from the album in the form of “The Horror of Our Love.” Apparently Ludo don’t go well with slow and sad songs; I’d suggest they stick to more jovial tracks.

Although clearly not groundbreaking, You’re Awful, I Love You is certainly a solid release. I find Ludo to be a band full of potential, that’s just waiting to explode, but something keeping them back a bit, I can sense it, so if this record’s gonna be their big break I can’t be sure, but I’m pretty sure their time will come soon. My only problem is that sometimes the songs sound a little immature, I can’t figure out just yet if that is intentional. Definitely worth a listen though, as it is a very fun CD and with summer just around the corner it was released at a moment where songs like these can thrive.