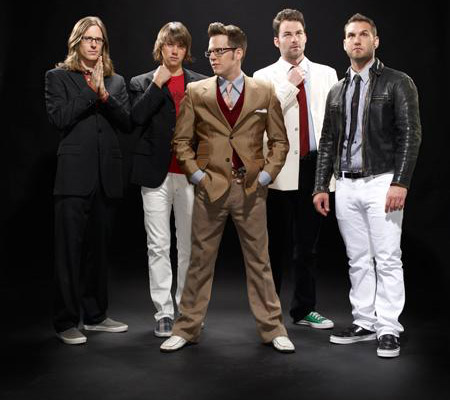 Some of you may remember when we wrote, in our Bands to Watch feature, about a nifty and emerging St. Louis pop-punk band, called Ludo. Their latest record “You’re Awful I Love You,” hit every respecting store on February 26th and was quickly embraced by their fans and new listeners alike. Recently I had the chance to have a short chat with two of the band members, frontman Andrew Volpe and synth master Tim Convy, about various aspects, like the band in general, the new album, the band’s musical directions and other fun stuff.

Andrew Volpe: Well hello there, good friend. Not much. You know. Keeping it real. Representing. How are you doing?

ZME Music: I’m doing great myself, thanks for asking, let’s just kick off the interview and find out some interesting stuff. Firstly, could you please introduce yourself to the more ignorant people reading this and not aware of your existence (i.e. Our readers)? You could start off by telling us how the band came together.
AV: Ludo formed as an acoustic duo in St. Louis, when Tim Ferrell and I (Andrew) met in the summer of 2000. We were a full band in our minds though – we just needed to find the right people to round out our super-team. After college, we moved to Tulsa to get away from all distractions. Tim Convy and Ferrell knew each other from playing in bands in high school, so he joined us in our acoustic tour. In the summer of 2003, we put ads out all over the internet to find Ludo’s bassist and drummer. Marshall from Omaha and Matt from Houston, respectively, answered the call, and moved into our tiny, crappy house in Tulsa. Three weeks after meeting each other, we recorded our debut album in St. Louis, immediately hit the road, and have toured basically non-stop since then. It’s a real man-bites-dog story. Not sure I used that term right…

ZME Music: I’ve read that you guys, got influenced a lot by pop culture. You band’s name in example, Ludo, is a giant muppet from a popular late ’80s movie called Labyrinth. You guys also have a lot of songs revolving around popular TV series and movie characters, that most of the time you satirize. My question is what do you believe pop culture had such a severe influence on you?
AV: Pop-culture was just omni-present in our lives growing up. Probably a product of being kids in the 80’s. As grown-ups I think a lot of 80’s kids live and breathe nostalgia. As a band, sometimes we find it ridiculous… but other times we’re guilty of the same thing. For better or worse, we’ve learned the habits of being plugged in to whatever’s going on in movies, music, and T.V., and can’t help but be painfully aware of so very much crap. 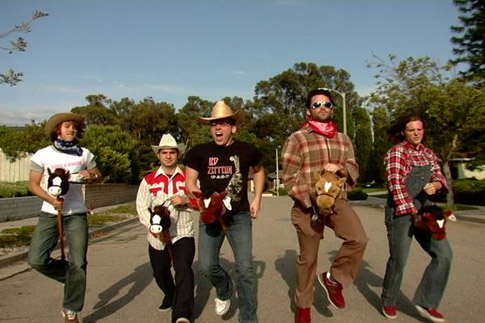 ZME Music: Let’s talk about musical influences. What kind of music and artists shaped you guys into the fine musicians you are today?

Tim Convy: It’s crazy – we all listen to REALLY different stuff and don’t agree on much. I guess the influences that i think come through the most are 50’s and 60’s rock from Chuck Berry to the Beatles and lots of the 80’s and 90’s radio that we grew up listening to – Chili Peppers, Weezer, Pear Jam, etc.
ZME Music: Ludo has been labeled by the media as power-pop/punk rock band, do you believe the genre describe your music well?

TC: No, but we don’t worry too much about it. We’re a rock band and beyond that – who cares?

ZME Music: Ludo will release its third record, “You’re Awful, I Love You,” on February 26 via Island Records. Your first two records were pretty well received, critically, and through some aggressive touring through out the US, you’ve managed to build a loyal following. Now that you’ve signed to a major label, do you believe You’re Awful, I Love You will represent the platform that will finally launch you towards mainstream success?
TC: hmmmmmm…..sure sounds nice. I guess for us it’s just about getting to more people. We’re certainly a bigger band now than we were a year ago and with the label and all that good stuff behind us, we’re getting our music to more people every day. I don’t think we’d have a problem with “mainstream success” but for us, it’s just about being the best damn Ludo we can be!

ZME Music: Care to elaborate a bit on the album’s name, sound and lyrics?
AV: “You’re Awful, I Love You” is actually a lyric from the song “Love Me Dead.” That line brings home a lot of themes on the album from aversive creepiness to pure, golden love, and how sometimes they are one and the same. In terms of the sound, it’s a rock record – that ranges from loud and brash to sweet and simple, bringing out pop aspects of our debut album and some of the darker, more adventurous tones of our rock opera. Either way, it’s beyond both of our other two releases by far. The songs are better and the production is way better. For the lyrics, every song is distinct, all coming from very different places. Each track tells its own story from a different character’s perspective, and although some of the lines may hit the first-time listener’s ear at a strange angle, I think you’ll find in a lot of cases that the words used, more closely resemble the way people talk in pedestrian situations than anything else. We like to think that our collection of songs is a more accurate representation of the array of situations, feelings, and tones of everyday life than say a record that from start-to-finish makes you feel like you’re a bad-ass or whose entire duration lets you wallow in soft melancholy. Life’s not like that and neither is our album.

ZME Music: Your latest single, off of the new album, “Love Me Dead” is doing pretty well on the airwaves, as well on the tube with its smashingly hot video. What’s the story behind the song and how did the music video filming go?
AV: Thank you for all your kind words! The song is based on a friend of mine (who will remain nameless…) who had a succubus of a girlfriend. She was horrible, but he just kept going back for more. It was insane, but it happens all the time. To some extent everyone does it. So yeah, I wrote a song about it. Woohoo! As for making the video, it was awesome. Our great buddy, Scott Culver, is a brilliant dude, and he did the video for us. We flew out to Los Angeles and showed up at a soundstage where Scott and his crew had gathered clowns and skeletons and sugarplums and all other manner of ridiculous thing for the shoot. A whole slew of very cool actors (not to mention the great crew) helped us bring the video to life, as we ran back and forth, changing costumes and scrambling for props live. It was like being in a demented school play. Good times… we’d do it again tomorrow if we could. But that would be stupid to make the same video again, so we won’t.

ZME Music: I know you like to avoid this subject, but I can’t quite help myself asking what’s with the “Ludo Ninjas.” Don’t worry this conversation will never leave the… internets [?]

TC: ha…. The Ludo Ninjas is what we call our our ever-so-dedicated elite Ludo street team force. All other information on that subject is classified. 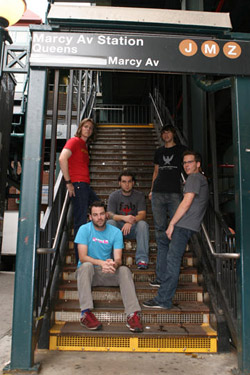 ZME Music: Any new music you’ve fancied as of lately? Maybe some new bands to recommend ?

TC: I’ve been listening to lots of Cat Stevens an Rufus Wainwright lately. I recommend both and as far as newer stuff, There is a band from Chicago called Oh My God that blows my mind – www.myspace.com/ohmygod
Also if REM and Modest Mouse collaborated on the “Oh Brothere Where Art Thou?” Soundtrack you would have Ha Ha Tonka – www.myspace.com/hahatonka
And pure rock n’ roll – The Effects – www.myspace.com/theeffects

ZME Music: OK, here’s a pretty weird question from a fan over at the Ludo discussion boards. The question is addressed to Convy and is as following: “what did your Elvis Sandwich, you ate when you got signed by Island, taste like?”

TC: It wasn’t bad or good, as much as it was interesting. The bacon flavor couldn’t compete w/ the PB&J. So really it was like when you put potato chips on a peanut butter and jelly sandwich.. I look forward to more of Elvis’s culinary delights as i reach other milestones in my life.

ZME Music: Well that’s a rap guys, thanks for taking the time to answer our questions. Keep on rockin’ !