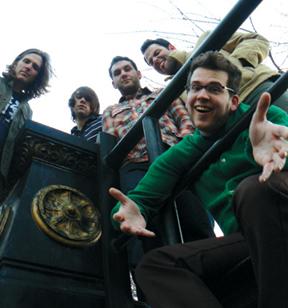 Ludo is a power-pop rock quintet, hailing from St. Louis, that have recently caught a lot of people’s attention through their cunning humor, great live shows and not ultimately good rock music. They sound like … well their sound doesn’t quite fit a fix genre, being somewhat unique, although being at the same time vaguely familiar. They much resemble [tag]Weezer[/tag], mostly thanks to frontman Andrew Volpe‘s Rivers like persona, but with a more glam-like attitude.

Ludo was formed by Andrew Volpe (vocals, guitar), Tim Ferrell (guitar, vocals), Tim Convy (Moog synthesizer, keyboards, vocals), Marshall Fanciullo (bass), and Matt Palermo (drums, vocals), as the band came together in bits and pieces, settling into the current lineup back in 2003, when they inhabited a 900 sq. ft. smarmy abode in Tulsa and started playing out. Since then they’ve managed to release two records; their self-titled debut Ludo and a mini, five track strong, concept album titled Broken Bride (2005). Over the course of the years they’ve toured coast-to-coast in survival mode and work hard to get to where they are today, backed by a insanely, cult-like, following of fans, that call themselves the “Ludo Ninjas,” a unit over 300 strong, spanned all across the country. 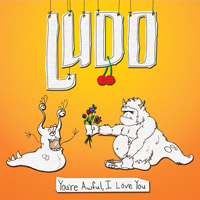 Now they’ve managed to get signed by a major label (Island Records), as they’re preparing for the release of their third studio effort “You’re Awful, I Love You.” The record was recorded in Los Angeles over the course of eight weeks with producer Matt Wallace (Maroon 5, Train, Faith No More) and was described by the band’s Andrew Volpe as “their healthiest, most-ten-toed musicbaby yet.” Well that’s one of putting it.

What probably got the band so popular, is their excellent Internet campaigns, namely their YouTube channel where they regularly post music videos and other comical stuff. “The Ludo Video Thing,” as it’s been dubbed, is currently as I’m writing at episode 15, that features the video for the album’s lead single Love Me Dead. A more darker approach to what the band’s been playing in the past, but still very fun and entertaining. Check out their channel and subscribe. For some further fun, check out the video bellow in which the band builds a igloo from scratch and plays “Go Getter Greg.”