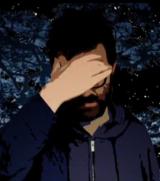 Ever noticed how every town, big or small, has one of those lunatic false prophets that preach about the end of the world? You know, ZZ Top-like beard, a maniacal stare, a billboard/sign relating how terrorist monkeys killed his family and so on. Yeah, I’ve got one of those, too, but you gotta admit, they’re really fun. I mean, there’s something about prophecies of impending doom coming our way that really strikes a funny bone for me. Today, however, my favorite apocalypse messenger is the Eels‘ frontman Mark Oliver Everett, better known as “E” in the scene, once with the release of the band’s video for their latest album’s title track, “End Times.” Yeah, leave it to E to depress the heck out of you, both musically and visually. “I don’t feel nothing now, not even fear/now that end times are here,” sings E in the song as he continues to rhetorically lament on the coming end of days, trapped in a cartoonish dimension.  Still, it’s a pleasant song, and an even more pleasant album, overall.

The video premiered on Spinner.