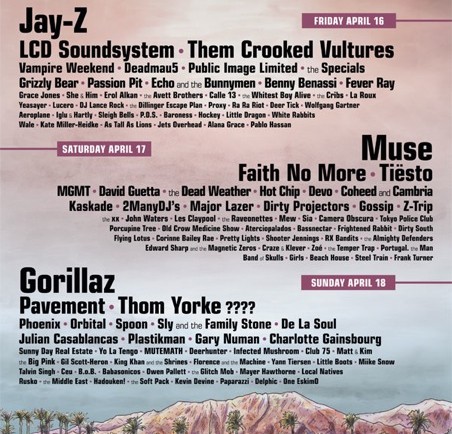 Coachella, the first major festival of the summer, just revealed it’s entire lineup earlier today, after a pretty long period of waiting and waiting. Headlining the event will be Jay-Z, Muse and the Gorillaz, joined by other incredibly talented acts like Them Crooked Vultures, Grizzly Bear, Yeasayer, The Dead Weather, Flying Lotus, Hot Chip, MGMT, Pavement, Ra Ra Riot, Vampire Weekend, The XX, Owen Pallett, Sly and the Family Stone or Thom Yorke???? (not sure what’s with the questions marks. I think that’s the way he likes to label himself nowadays).

Like every year, flocks of young music enthusiasts will flock to the Empire Polo Field in Indio, California, during the weekend of 16-18 April.