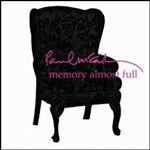 Wine gets better by the ages and so does [tag]Paul McCartney[/tag]’s music, releasing his 21 solo album a few days ago, at the soon to be age of 65 (June 18, happy birthday Paul! ). It’s a tough task to live in Paul McCartney’s shoes in terms of artistic life, living in the shadow of his former successes (both in solo carrier and [tag]The Beatles[/tag], Wings period), with every new album watched and listened by the whole world, looking for the next revolutionary sound and in the end disappointing even though you’ve made a fantastic record. But i guess that’s the burden all great rock legends have to live with and i’m sure Elton, Sting, Mick or Keith would agree with me on this.

The ‘Memory Almost Full’ project was actually almost completed since 2003, before his last album “Chaos and Creation in the Backyard”, released in 2005, but he shelved it, later adding that he wanted a collaboration with [tag]Radiohead[/tag]’s main producer Nigel Godrich on it. What i found interesting about this album tho, is this label Starbuck’s Hear Music, the album being provided with massive promotion in the over 10,000 Starbucks stores in 29 countries. What’s more refreshing then a morning coffee with your favorite pop star on air?

The title is very suggestive for the tracks to come, Sir McCartney dwelling on his ‘Ever Present Past”, with a lot of nostalgic tracks, but also covering some joyous and catchy tracks like “Dance Tonight” ( the album’s first single), with “You Tell Me” that continues on the same cheerful note.

On “Vintage Clothes”, the self-effacing retro-culture commentary, Macca marvels at what has come and gone ( the main theme of the album ). “Don’t live in the past/Don’t hold on to something that’s changing fast”. Memory Almost Full’s epilogue is marked by the piano ballad “The End of the End”, a meditation on his death and on the events that will fallow his death, his heritage, his legacy to the world through his art, i only hope he outlives me. Paul proves again that he’s still got it, the great vocals and great lyrics of “Memory Almost Full” make it a great addition to his overwhelming discography.