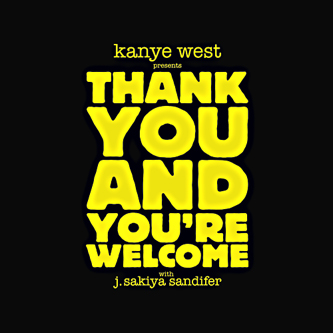 Kanye West New book thank you and you're welcome

Kanyes West is a very … let’s say, up front man. He’s always likes to be at the center of everybody’s attention and is well know for being a big douche. Yes, I tried avoiding that word as much as I could, but it’s just not possible under his circumstances. He just embowers douchbaggery in all that he does.

Honestly, folks, I really like most of his work (especially the last 2 albums), but just because the man behind the music is a total ignorant, ego-centric, arrogant individual, does this mean we should think less of him, musically? I think definitely not. Kanye will still have fans and plenty, because what he may lack in simple things like manners or even conversation skills, he makes up for in his music.

His latest stunt, however, makes it hard for anyone with the slightest degree of common sense not to regard Mr. West as a cretin. To be brief, Kanye West, a well known anti-books advocate will soon release his first BOOK, “Thank You And You’re Welcome.” This is an excerpt from his blog, announcing the book:

…I teamed up with co-author J. Sakiya Sandifer to make my literary debut with Thank You And You’re Welcome!, an entertaining volume of “Kanye-isms “– the creative, humorous and insightful philosophies and anecdotes used in creating my path to success. It captures the same wit, playful irony, and piercing insight found abundant in my lyrics. In Thank You And You’re Welcome! I deliver my personal message uncensored, without any five-second delay or media distortion…

Here it is, an open, long time proud disbeliever in the power of books, who most likely never read a book cover to cover in his life, writing a book of his own about philosophical concepts (Kanye-ism. God I loled so hard on this one!!!) and how he’s found success. Here’s what I’ve read about the book on Reuters.

His book is 52 pages — some blank, others with just a few words — and offers his optimistic philosophy on life. One two-page section reads, “Life is 5% what happens and 95% how you react!” Another page reads “I hate the word hate!”

“This is a collection of thoughts and theories,” West, 31, said in an interview about his spiral-bound volume, which was written with J. Sakiya Sandifer.

West said he put his thoughts in a book because “I get paraphrased and misquoted all the time.” He calls his wisdom “Kanye-isms.”

OK. Seriously now. Who in their right mind would pay 10$ for this piece of crap? Pardon my french. Apparently, a lot of people, judging from the various comments he’s been receiving on his blog. Speaking of which, why would Kanye want to post his rants and life ramblings in hard cover book when he could’ve very well manage to do it through a series of simple blog posts? Probably because of the most common reason people resort to hypocrisy – money. And you, Mr. West,  are one big hypocrit. I respect your music, but I feel very less of you as a man.