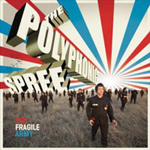 ‘Eccentricity’ is a word that may describe Texas symphonic rockers [tag]The Polyphonic Spree[/tag] best, as the band employs let’s say a unique format: no more and no less then 24 members, a regular orchestra. Now at their third album The Fragile Army, the band ditches their already notorious white robes in favor of black combat kits with hearts, red crosses and a new logo, suggesting a more darker approach from their last 2 albums. This is a more melancholic record, don’t get me wrong their hippie sunshine “all will be ok, as long as we stick together” style hasn’t disappeared, maybe it’s even more evident then ever, but they have developed and evolved as a band , as it can be seen in their lyrics having politics and protest themes. This evolution began with their last EP, prior to Fragile Army, “Wait”.

A fine example is the track “Section 24” (if you are not familiar with The Polyphonic Spree’s previous albums, this is how they catalog their songs, guess their too cool to call them tracks) also known as “The Fragile Army”. The song covers ones regret of not seizings the opportunity while he still could, “Carpe Diem” if you wish. Frontman Tim DeLaughter’s vocal qualities are put to good use here, as well as his ever present chorus, accompanied by some rythim guitars and pianos.“You tighten your back up/ Oooh, you’re so psychic/ We all want to know/ Did you marry the witch you’ve come to know?”

The albums debut single “Running Away” (“Section 22”) , together with “Younger Yesterday” (Section 25) and “The Championship” (Section 31) make the LP’s anthems. Running Away is packed with radiant harmonies, pulsating guitar riffs and piano crescendos intertwine with a jovial DeLaughter and his ever so present chorus.“I feel so excited and delighted today / ‘Cause you decided to be in my life/ It’s like running away with the wind in our faces / Like flying…”

Polyphonic Spree have always been criticized for their “childish” lyrics, however in Fragile Army the lyrics are slightly elaborated, intertwining the common feel-good Spree sound with a “message”, something beyond their apparent sunshine-beaten path. “We Crawl” does just that, with a “together we’re alright” message, failure is part of everyone life, together we can pass by life’s stumps.

“Get Up and Go” (Section 23) could be [tag]Queen[/tag] in their prime, with a Bohemian Rhapsodish sound, while “Light To Follow” (Section 29) proves to be one of the album’s defiantly interesting moments, exploring a various feelings in the lyrics, such as love in these troubled times when love isn’t as cherished as it should be.

Although no longer a novelty, The Polyphonic Spree will continue to amaze us with their future installments, inspiring optimism to the world as only they can. They have somewhat reinvented their sound on The Fragile Army, some fans may not enjoy this and turn to something else, as other who’ve listened to the Spree for the first time may be instantly captivated and tempted to march alongside The Fragile Army. All in all this is album that makes your day go round, this is an album that inspires hope for the hopeless, it’s a ray of light guiding us to a more optimistic future, it’s brilliantly talented !