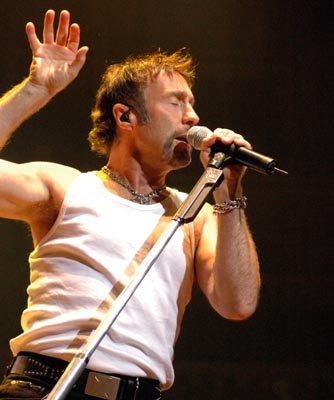 When I read about this, two ideas slammed into the walls of my brain: “great” and “blasphemy”. I mean, Queen without Freddie is like a party without booze, yet who wouldn’t go to such a gig, even just to hear Brian May do his thing? Now don’t get me wrong, I have absolutely nothing against Paul Rodgers… he’s great! But filling the shoes of a man who undoubtely was among the best frontmen in the world (probably even the best)… is not something you can get away with.

Let’s start with the facts, shall we? Brian May, Roger Taylor and Paul Rodgers have recorded their first album’s worth of material, jointly written and produced. While the title has not yet been announced, the album is being readied for release September 1, two weeks ahead of the start of the tour.

The tour, aye… They haven’t been on the tour since the Freddie days. This time, it’s going to last 4 months. But another interesting thing is that bassist John Deacon, who retired from the music business in the late 1990s, will not take part in the tour. While I have to say that he could have given the music industry and fans so much, I totally understand this decision, and the amount of respect I feel is only equaled by the sadness that I won’t see him perform again. Anyway, one question still bugs me: how come they’re still called ‘Queen’, without half of the members? I agree that Brian is the brain of the band; but Freddie was definetly its heart and Deacon was its lungs. What can you do without your heart and lungs? A transplant, I have to say. But ‘Queen + Paul Rodgers’ is a satisfying compromise, nonetheless, at least for some. Tour dates are as follow:
Leg 1:
09/16 – Moscow SCO Olympic Arena, Russia
09/17 – Moscow SCO Olympic Arena, Russia
09/20 – Gdansk Shipyard, Poland
09/21 – Berlin Velodrom, Germany
09/23 – Antwerp Sportspaleis, Belgium
09/24 – Paris Bercy, France
09/26 – Rome Palalottomatica, Italy
09/28 – Verona Arena, Italy
09/29 – Zurich Hallenstadion, Switzerland
10/01 – Munich Olympiahalle, Germany
10/02 – Mannheim SAP Arena, Germany
10/04 – Hannover TUI Arena, Germany
10/05 – Hamburg Color Line Arena, Germany
10/07 – Rotterdam Ahoy, Netherlands
10/10 – Nottingham Arena, UK
10/11 – Glasgow SE&CC, UK
10/13 – London 02, UK
10/14 – Cardiff Arena, UK
10/16 – Birmingham NIA, UK
10/18 – Liverpool Echo Arena, UK