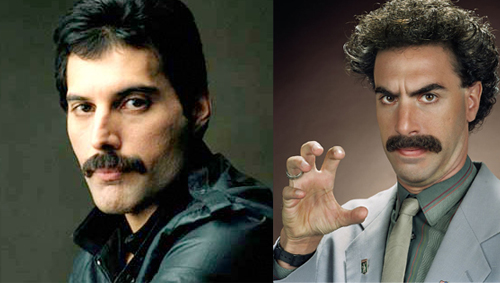 One can see the resemblance, but is Cohen capable to fill Freddie Mercury's immense shoes? I'm skeptical.

One can see the resemblance, but is Cohen capable to fill Freddie Mercury's immense shoes? I'm skeptical.

“Hello it is me, Freddy Mercury… I joking, he die of AIDS,” said Cohen wearing a muscle vest as he made his apparearance at the MTV Europe awards which he presented. Ironically or not, Sacha Baron Cohen, a comedian most known for inventing timeless characters such as the flaming rapper Ali G, the gay fashionista Bruno or the ever witless Borat, has been chosen to play one of rock’s greatest icons of all time, Queen frontman Freddie Mercury in an upcoming biopic. The film, as of yet still untitled, will focus on the legendary group’s formative years and will finish with their performance at 1985’s ‘Live Aid’, which is considered one of the greatest rock gigs of all-time.

The script will be written by one of my favorite screenwriters Peter Morgan, famous for penning such titles like Frost/Nixon, The Queen or The Last King of Scotland. The movie will be financed by GK Films partners Graham King and Tim Headington and the project will be produced in partnership with Robert De Niro and Jane Rosenthal’s Tribeca Productions, and Queen Films. Surviving band members, Brian May and dummer Roger Taylor are both onboard for the movie, but only for the roles of musical consultants.

Now, I like Cohen – I really do, but aside from his satirical roles, I find the rest of his work very unconvincing in settling whether or not he can be up for the task of playing Mercury. I agree, mustaches and all, the two share some resemblances, but really is that enough? This is a movie which we should definitely follow across its production, and undoubtedly this could make or break Cohen. What’s next, Weird Al to play Brian May?