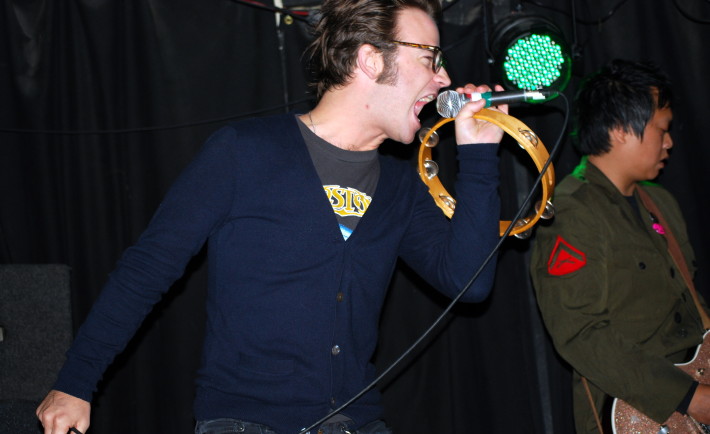 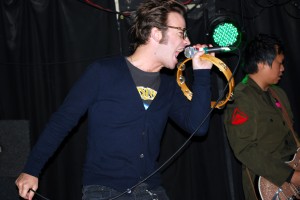 Welcome to Ashley, “one of Chicago’s best live bands,” was an energetic, crowd pleasing, good time at the Empty Bottle on October 23rd. This show in an effort to promote their new album, “Absent man” was fun and refreshingly new. Coley Kennedy, the front man for WTA took time out of his rock star day and answered a few of my burning questions.

How did Welcome to Ashley form and what has kept the band together?

Coley: Pete and Jeremy have known each other for years.  I have known Pete since the first grade and Jeremy since high school. After high school we started a band called the Bennies with a couple of our other high school pals. Brendan Kelly was on drums and John McDonough on rhythm guitar.  It was a lot of fun.  We were young and invincible.  We had a shitty van, and a basement to rehearse in.  We spent an equal amount of time drinking, talking shit, and playing music. Some of our songs are at  www.myspace.com/thebenniesjxn

We met Sherrlia, (WTA’s drummer) in 2001, in Nashville, TN and we became good friends. Sherrlia was looking for a band and we were looking for a drummer.

Coley: Performing is much less technical.  There’s much more feeling involved.  You’re in the moment.  Also, performing live we’re able to showcase ourselves in front of an audience whether it be 5 people, or 500.  There’s a connection.  It’s a great feeling.  Especially when you know you’re a great band.

Why do you think you’ve been dubbed as “one of the best live bands in Chicago?

Coley: Because we are.

What is WTA’s writing process?

Coley: We have an interesting way of writing.  A song either evolves one of two ways with WTA.
1. Pete will come up with something great on guitar, and put in on tape.  I’ll listen to the tape, and come up with words and a melody. Then, Jeremy and Sherrlia will listen to the tape and work out a bass line and drum parts.
2. Since I’m not a guitar player, but can play a little mandolin; I will come up with chords, a melody and words, and record them all.  Then, Pete will come up with a guitar part, record it, and then give it to Sherrlia and Jeremy. We almost always work on a song individually for a bit before we rehearse it as a full band.

Your show at the Empty Bottle was filled with fans singing & dancing. You also played 2 encores. How important are your fans & why do you think they have followed your musical journey?

Coley: Aside from our love of making music; our fans, and family and friends are the reason for WTA’s existence as a band.  It’s a great feeling to hear people singing along to our songs when we play live.  Especially, since they are words that I wrote.

What does Absent Man as an album represent to WTA?

Coley: Recording Absent Man was a bit of a departure from previous recording sessions.  We recorded it quickly, and live (with the exception of a little guitar overdubbing), with no cutting and pasting.  The songs are a little less poppy and have a slightly darker undertone than our other recordings.  We laughed about some of the song titles, “Absent man”, “Nothing but grey skies ahead”, “Bang you’re dead.”  Also, we referenced bands such as: early REM, The Clash, and Generation X, when mixing and mastering.  Our engineer, Vince Cassamata, was hell bent on NOT making this EP sound overly produced and overly compressed.  No inspirations or messages.  We try not to think too much about these things.  We’re just a 4 piece band who write and play what we feel are great Rock and Roll songs.

What does the future of Welcome to Ashley look like to you?

Coley: We’d like to play as much as possible.  Hit the road soon and make another record.

Last record or song you listened to?

Coley: The last record I listened to in its entirety was Morrissey’s “Vauxhall and I.”  It’s such a beautiful record.  I love the opening lyrics, “There’s gonna be some trouble…” I’m also digging some of the songs off the new Julian Cassablancas album, particularly the track “Ludlow St.”

What are your favorite local acts in Chicago?

Coley: There are not a lot of local bands that I am into but, there is a handful that I really like such as, Pool of Frogs, Tennis Courts, Blah Blah Blah, V Sparks.

What is your favorite venue to play?

Coley: Off the top of my head, I’d have to say the Empty Bottle.  They have such great history, staff, and sound.  And, it’s right down the street from the band house, which makes stumbling home a breeze.

I just want to continue making music with WTA and I wouldn’t mind having a drink with Shane MacGowan!

Definitely check out Welcome to Ashley if you haven’t already heard their great music!