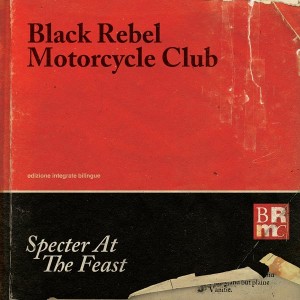 It never ceases to amaze me how effective music can be in acting as a therapeutic coping mechanism in getting us through the toughest situations life seems to throw at us.  It had been two long, grueling years since BRMC suffered the tragic loss of sound engineer, producer, and father of bassist Robert Levon Been, Michael Been. Michael was an essential part of this project, and his sudden death was the main driving force that initiated the creation of the band’s newest album, Specter at the Feast.

“It terrified us that we were robbed of the very thing that we could always call on. I described it once where playing rock & roll was an escape. It begins out of, ‘I just want to transport myself out of this pain, this place,’ and it was always like that growing up. And then all of a sudden it switched, and now music is the place where kind of you can’t hide from anything. Everything’s turned around.” – Robert Veen

These guys have undergone a full-throttle sonic evolution throughout the thirteen years of their existence, releasing three records that have ranged from garage-rock, to fuzz-layered psychedelia, to blues and gospel, and now this record manages to encompass all of these sounds into one beautiful and cohesive masterpiece. The turnout of this album only goes to show that the best music can come from a personal reaction to a tragedy or loss, adding on to the countless number of albums that have successfully turned such heartbreaking circumstances into such extraordinary and unparalleled works of art. And this is because this album has the one true ingredient seeping through it that resonates with fans everywhere: pure, unadulterated, raw sincerity. The songs differ to such a large extent from one another, from the peaceful “Lullaby” to the chaotic “Rival”, representing the range of human emotions experienced as one deals with a difficult tragedy (anger, self-reflection, depression, loneliness, etc). The band pays homage to Michael Been by covering one of the songs from his rock band, The Call, entitled “Let the Day Begin”, which is easily one of the standout songs on the album.

Having been a fan of this band for many years, it’s great to see them back after being gone for so long, and I’m definitely looking forward to witnessing whatever the future holds for these guys.