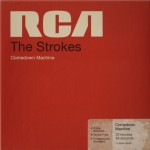 With their fractured Angles recording sessions, the absence of any definite tour plans, and the complete media blackout surrounding their new album, The Strokes are giving every indication that their time together is up. When you consider that Comedown Machine, the band’s new album, will be their last on release RCA, it all makes sense. So when the video for their song “All The Time” was released earlier this month, it seemed to confirm what everyone was already thinking. The video featured no new footage of the band and instead gave highlights of the group’s career. It came across as a band’s goodbye. That’s what makes Comedown Machine such a surprise.

Comedown Machine is The Strokes’ most cohesive and consistent record since Room On Fire. It is also the most adventurous album they’ve made and their first successful step away from their signature garage-rock sound. Album opener “Tap Out” begins with distorted guitar before transitioning into a relaxed groove and some of the lightest vocals ever heard from Julian Casablancas. The song’s airy quality is unlike anything The Strokes have ever done; it’s brilliant. Next up is the aforementioned “All The Time,” the album’s first single. Unfortunately, the track sounds like the Strokes by numbers and, despite a great guitar solo, it’s the least rewarding song on the album.

However, after the minor speed bump of “All The Time,” Comedown Machine hits its stride. “One Way Trigger,” the first track released from the album, is still as weird as ever. But while the a-ha inspired synth riff and Julian Casablancas’ falsetto may send purists running, it’s still a Strokes song at heart. It’s catchy and demands repeated listens, just like the best tracks from Is This It and Room On Fire. Following “One Way Trigger” is “Welcome To Japan,” which can be best described as funky. This may not be what people expect from The Strokes, but the song is a blast, regardless. The line “what kind of asshole drives a Lotus?” is sure to go down as one of The Strokes’ most quoted lyrics.

“80s Comedown Machine” marks another departure from the band’s classic sound. The slow-moving ballad is driven mellotron, giving the song a “Strawberry Fields Forever” vibe. At just under five minutes in length, this near-title track is the longest song in The Strokes’ discography. They follow this with “50/50,” the shortest and fastest track on the album. The song contains a prominent guitar riff and distorted vocals straight out of Is This It. Casablancas hasn’t sung with this much intensity since “Reptilia.” Unlike, “All The Time,” “50/50” fits right alongside other Strokes’ classics and serves as a reminder that The Strokes haven’t lost their touch. Following this is “Slow Animals,” which sees the band in ballad mode. The song features a slow build up before a rewarding emotional payoff and multiple guitar solos.

“Partners In Crime” starts with a goofy yet awesome guitar riff that points to an underlying theme of the album: fun. While Angles seemed like a laborious album to make, Comedown Machine sounds like a band cutting loose and having a good time. The next track on the album is “Chances.” This ballad is the sappiest song The Strokes have ever recorded, and it stretches Julian’s falsetto beyond his range. It’s one of the the weakest tracks on the album, but it’s far from a bad song and demonstrates that The Strokes are willing to take chances (pun intended). “Happy Ending” is one of the best examples of the band’s melding of old and new. It has interesting guitar work like you’d expect from The Strokes, but the multi-tracked vocals and poppy chorus set it apart from their older material.

The closing track on the album, “Call It Fate, Call It Karma,” is the eeriest song that the band has ever recorded. The verses aren’t too far off from those of “Call Me Back,” and the chorus sounds like something from a Little Joy song. Yet, the song crackles like an old record, giving it a sinister feeling. “Call It Fate, Call It Karma” demonstrates The Strokes’ growth and desire to push the envelope like they never have before. It may the best track on the album.

After listening to Comedown Machine, it’s hard to imagine that The Strokes will break up anytime soon. The band sound more together than they have since the release of Room On Fire. Julian Casablancas seems particularly invested, and his variety of vocal styles reflects the effort he put into this record. A special moment on Comedown Machine occurs at the end of “Slow Animals.” When the song comes to a close, the band members begin to laugh. While this seems like a small detail, it’s actually huge: The Strokes sound like they’re having fun for the first time in nearly a decade. When I look back at the “All The Time” video, I no longer see a band reflecting on the end of a great career. Instead, I see a band that has rediscovered the camaraderie that brought them so much success in the past. Maybe I’m being too optimistic, but I just don’t buy that The Strokes are done. Comedown Machine is not the best Strokes album, but it’s the most significant step forward of their career. It seems that this album will be remembered in one of two ways, as either the end of The Strokes or the beginning of a new era for the band. Let’s hope that it’s the latter.