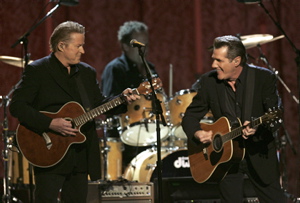 They were in fact ready to give up music for a quiet life. But what they did was that they regrouped and recorded their first new album in 28 years.

“We either had to fold our tent or make a record,” guitarist Glenn Frey tells CBS’ “60 Minutes” in an interview scheduled to air Sunday. “We were going to be done,” Frey says. “And I wouldn’t want to have it end . . . where … you’re just sort of doing a caricature of yourself, you’re just doing a tribute to yourself.”

The band’s new album, “Long Road Out of Eden,” debuted at No. 1 when it was released last month. It sold out in huge numbers and older and younger fans listen to it regardless of age. “It came out better than I thought,” vocalist-drummer Don Henley says. “I think a great many of the songs on it will stand up with the best work we’ve ever done.”

They made it big in the ’70s with a string of hits which included “Hotel California,” “Take It Easy” and “Life in the Fast Lane.” Henley also had a successful solo career but he says the Eagles are better together. “There’s a certain sound that we make when we sing together that over the past 35 years has become ingrained in people’s minds,” he says. “I can’t sound like that with anybody else except these guys.”.