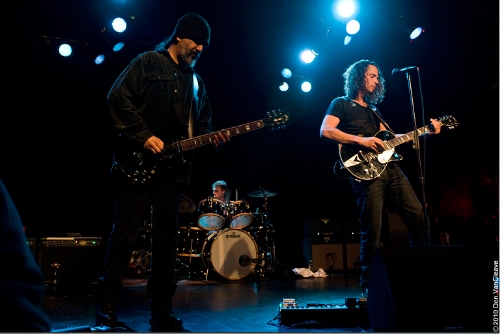 Things are still a-stir in the world of Soundgarden. Now that all involved have entered a healthful middle age, they’ve cast their one good eye towards the past, and played a number of reunion shows, including what looks like an excellent set at grimly indie-fied festibule Lollapalooza. (Moderately tuneful but utterly bland British glumsters Mumford & Sons played there this year, to give you an example of how far from its freak-show-encompassing, bile-drinking-contest roots the Lolla endeavour has ventured.)

But no! Not to be proven hoary old men – despite Kim Thayil’s striking resemblance to an ancient monk who will teach us of the self and the hereafter – Soundgarden will be releasing a greatest hits album through the medium of “vidja game”. (This unabashed modernism is hardly surprising, if you trouble yourself to disentomb your bitterly repressed memories of Chris Cornell’s “hip-to-hop” album, Scream, with its various bleeps and bloops. Eurgh, etc.) Telephantasm, for that is the album’s ridiculous name, will be featured as day-one downloadable content for upcoming Beating-Dead-Horse simulator, Guitar Hero: Warriors of Rock. This apparently is progress.

But of course, I’m just being bleakly cynical for my own amusement: Soundgarden were, and remain, a fantastic band, and they deserve whatever exposure they get from this dalliance. And tally-ho! They’ve retouched and restored an old unreleased track, “Black Rain”, for inclusion on the thing. And thanks to American wireless radio-graph technicians “107.7 The End”, you may now listen to this. It’s quite good.

And then also have this for your troubles.